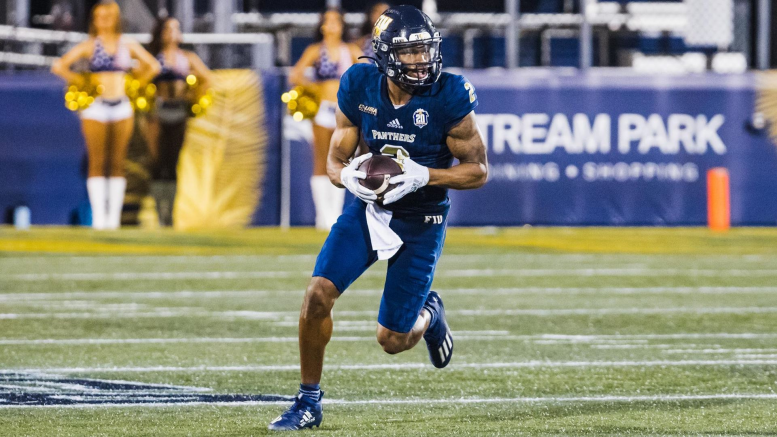 The FIU football team has now lost eight games in a row, this time against the Old Dominion Monarchs by a score of 47-24.

With a 1-8 record and only three games to go, the Panthers are dead last in the Conference USA Eastern Division.

“The issues that we have aren’t fixable,” said head coach Butch Davis postgame. “When you’ve got 30 players not playing, we’ve got 15-18 kids who shouldn’t be suited up playing. They should be redshirting, so it’s a tough situation.”

Following a three and out on offense by FIU, Old Dominion wasted no time moving down the field and scoring the first touchdown of the day 12 minutes in.

Following a fumble by the Panthers on their next drive, ODU capitalized with a field goal, extending their lead to 10-0 early.

FIU’s offense got into rhythm on their next possession, resulting in a long ball connection from quarterback Max Bortenschlager to wide receiver Tyrese Chambers, closing the score to 10-7.

The Monarchs responded on their next drive off of a long handoff that went the distance, increasing their lead to 17-7 with seven minutes still remaining in the first quarter.

Still in the first quarter, FIU looked to answer with another touchdown, but the Panthers had to settle for a field goal from kicker Chase Gabriel to cut Old Dominion’s lead to 17-10. However, ODU scored on their next drive to bring the lead back to 24-10.

Most of the second quarter was a stalemate between the two schools. FIU had managed two turnovers on defense, but couldn’t convert them to points on the ensuing offensive possessions. ODU missed a field goal with two seconds remaining, keeping the score at 24-10 into halftime.

The Monarchs opened up the scoring in the second half, converting a touchdown five minutes in to raise the lead to 30-10. The extra point attempt was no good.

FIU was able to quickly answer on their next drive, with another deep ball by Bortenschlager to wide receiver Bryce Singleton, cutting the lead once more to 30-17.

In the beginning of the fourth quarter, Bortenschlager threw a pass while under pressure, resulting in a pick-six for Old Dominion, bumping up the score to 37-17 and killing FIU’s momentum on offense. Later on, ODU tacked on three more points to reach 40 points.

Backup quarterback Grayson James stepped onto the field on their next possession, connecting with Singleton in the end zone to lower the Monarch’s lead to 40-24 with six minutes left in the game. Another touchdown with a minute to go secured a 47-24 win.

The statline ended up pretty even for both teams. FIU outpassed ODU with 328 yards in the air, but the Monarchs still led in total yards gained, first downs achieved, time of possession, and held on to the ball three minutes longer than the Panthers.

“In the locker room, there’s not a lot of joy,” said Davis. “If you truly care, it ought to eat your guts, you ought to be a little depressed. Every kid’s gotta look in the mirror and decide how they played and how they’ll do the very best they can”

Bortenschlager threw for 315 yards from 18 completions out of 32 attempts, along with two touchdowns and an interception in the fourth quarter. Singleton was FIU’s leading receiver with 199 yards and two touchdowns.

The Panthers will travel to Murfreesboro to take on the Middle Tennessee Blue Raiders on Saturday, November 13 at 3:30pm.