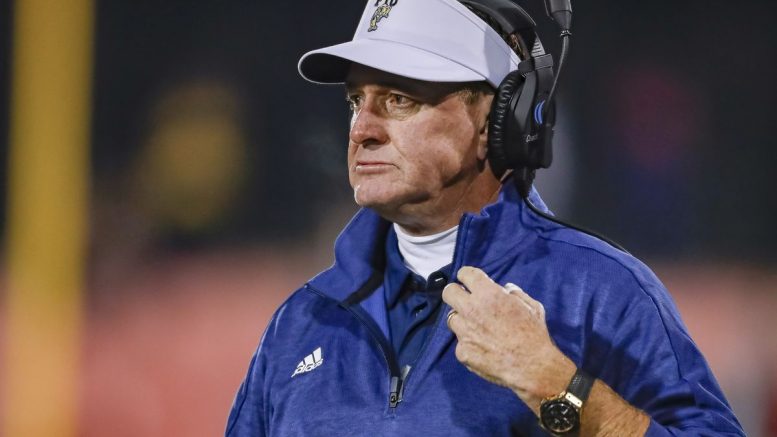 FIU Football Head Coach Butch Davis will not be returning to the team next season.

Multiple media outlets, including NBC 6, have reported that Davis will still remain on the team for their final three games of the season. Their last game is against the Southern Miss Golden Eagles on Saturday, November 27.

Davis had spent five years with the Panthers, leading the team to three straight bowl appearances. However, FIU is currently on an eight game losing streak and has only won a single game in their last 16 matches dating back to 2019.

UPDATE: Following an interview with Brett McMurphy and Action Network, Butch Davis has confirmed that he will not be returning next year, citing that “the administration has been sabotaging the program.”

According to the article, Davis’ agent had requested a one-year extension to his contract, but was declined by FIU officials, and Davis himself was told he would not be returning as head coach four days before his birthday.

Davis listed multiple reasons why the FIU administration was tampering with the look and performance of the team.

-He was only allowed to offer single-year contracts to his assistant coaches, which made multi-year deals from other universities seem more lucrative.

-The football program was using decade-old shoulder pads that were given to them by the Mississippi State Bulldogs, who had replaced them. FIU wouldn’t fund the team enough money for new ones.

-FIU is reusing football uniforms that are nine years old.

-Davis’ coaching staff was not allowed to go on the road to recruit high school players in the state due to financial reasons as well as the COVID-19 pandemic.

-FIU had posted a job opening for the head coaching position just five games into the football season, onto their official website as well as the American Football Coaches Association website.

“Their decisions to post the job has resulted in a major negative impact on the football program and our ability to recruit and retain players,” said Davis.

Davis joined the program in 2017. prior to his arrival, the Panthers had only been to two bowl games and were on a five-season losing streak. Davis turned the team around, posting back-to-back winning seasons and three straight bowl games.

However, following their win against the Miami Hurricanes in 2019, the Panthers have yet to win against an FBS opponent, losing out the rest of the season that year, going 0-5 in 2020, and losing nine straight games this season following a win against the Long Island Sharks, and FCS school. Davis’ current overall record at FIU is 24-30.