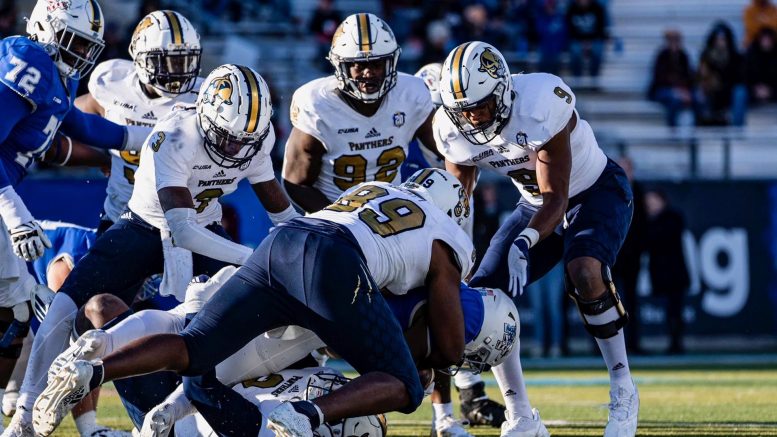 The Panthers defense struggled, allowing 241 yards on the ground to the Middle Tennessee Blue Raiders in their 50-10 loss. Photo by FIU Athletics

The FIU football team extended their losing streak to nine games, losing in major fashion to the Middle Tennessee Blue Raiders on the road by a score of 50-10.

Coming into the game, the Panthers were looking to snap a four-game skid in Murfreesboro, where they have allowed on average 44 points per game to the Blue Raiders. However, Saturday’s loss displayed many of the same defensive and offensive issues for FIU.

With this defeat, FIU has an overall record of 1-9, which is dead last in the Eastern Division of Conference-USA and tied with Southern Mississippi (1-9) for the worst record in all of C-USA.

Middle Tennessee had the ball first and scored first on a 14-play, 75-yard drive ending with a touchdown pass to wide receiver Jimmy Marshall.

On the Panthers first offensive possession, FIU moved the football into the Blue Raiders territory, but struggled moving the ball and scored on a Chase Gabriel 53-yard field goal, which is tied for the longest in program history, making it 7-3.

Middle Tennessee drove down the field once again for 75-yards as true freshman quarterback Nick Vattiato found receiver Yusuf Ali on a 1-yard touchdown reception, increasing the lead to 14-3 early in the second quarter.

After a quick three-and-out for FIU, the Blue Raiders had no time wasting scoring on their third straight drive as running back Frank Peasant took it to the endzone for two yards, exposing the Panthers rushing attack and making it an 18-point lead, 21-3.

As the Panthers were looking to get back into the ballgame, on the first pass for FIU’s drive quarterback Max Bortenschalger threw an interception into the hands of Middle Tennessee cornerback Quincy Riley, returning it for 45-yards for the touchdown.

On the immediate drive for FIU, it had been increasingly clear that there was no rhythm on the Panthers offense as receiver Tyrese Chambers had the ball stripped from Middle Tennessee safety Greg Grate Jr., recovering the ball inside the FIU 20-yard line. The Blue Raiders scored again on the drive, this time on a 34-yard field goal, making it a 31-3 game.

With four minutes left in the first half, Bortenschlager threw his second pick of the game, this time by Middle Tennessee team captain Reed Blankenship. Once again, MTSU would kick a field goal from 46-yards as they increased their lead to 34-3 at the end of the first half.

At the start of the third quarter, both teams punted on their first two drives, and as FIU had the ball inside their own five-yard only for Bortenschalger sacked inside the endzone by defensive tackle Marley Cook for a safety.

As the Blue Raiders got the ball on the turnover, they got their fourth offensive touchdown on a 57-yard rushing touchdown by running back Martell Pettaway as MTSU took a 40-point lead heading into the fourth quarter.

Into the final quarter of the game, Middle Tennessee continued the onslaught on the ground game as receiver Jaylin Lane ran for 29-yards for the score, as their lead increased to 50-3 early in the fourth.

With the game seemingly over for any comeback, FIU made a quarterback change as true freshman Grayson James entered the game for his sixth appearance of the season.

He led a 8-play, 53-yard drive, with the Panthers getting their first touchdown score of the game on a 8-yard carry from running back Maleek Williams, as the game finished by a score of 50-10.

Overall, the FIU defense gave up a total of 414 yards, allowing 261 yards on the ground and 153 yards through the air. On offense, Panthers starting quarterback Max Bortenschalger struggled, going for 9-of-20 passing, throwing for 68 passing yards, while being picked off twice, and sacked five times.

The FIU run game did help much as senior running back D’vonte Price did not make the trip due to a shin injury, with the team rushing for only 67 yards, with freshman E.J. Wilson Jr. led the way with 43 rushing yards.

FIU will travel back to South Florida taking on the North Texas Mean Green in their home game of the season on Saturday, November 20 at 7PM. The game will be streamed on ESPN3 and heard on Throwback 105.5 FM on iHeartRadio.