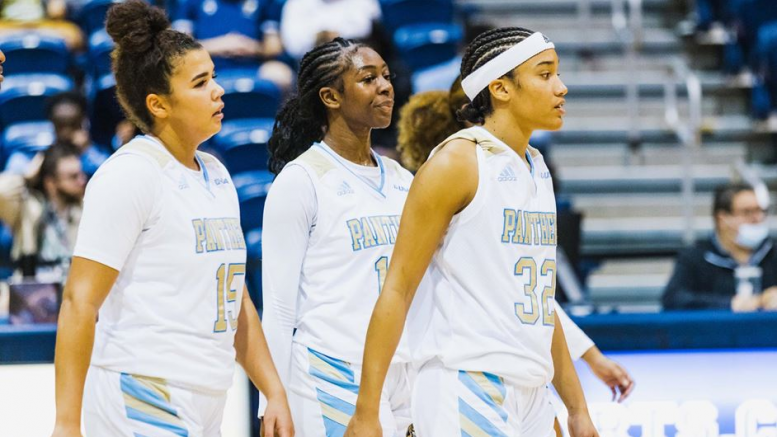 Kyla Nelson, Emerald Ekpiteta, and Ariel Colon heading to the court to take on George Mason. Photo by FIU Athletics

The FIU Women’s Basketball team split their two-game home opener of the 2021-2022 season against the George Mason Patriots and Florida Memorial Lions, splitting both games.

Tuesday’s game against George Mason began with a 12-3 lead for the Patriots, but the Panthers bounced back by scoring an unanswered 11 points. FIU managed to close the gap at the end of the first quarter down 16-18.

The Panthers scored back-to-back points giving them the lead to start the second quarter at 21-18. The back and forth battle continued as the first half closed with Gorge Mason regaining their lead with the score going 30-29 into the halftime break.

Forward Emerald Epiteta led the charge with six points as the Panthers went on another scoring run with 10 unanswered, giving them a 39-30 lead to start the second half. FIU was up by as much as 10 during the quarter but ended the third with a score of 53-49.

The Panthers held a seven-point lead over the Patriots in the fourth quarter but costly fouls and turnovers ultimately gave George Mason the lead with 1:46 left in the game.

In a game in which there were eight lead changes and seven ties, the Panthers ended with a loss to the George Mason Patriots by a final score of 67-69.

The Panthers led the game with 10 three-pointers made and eight steals. Forward Kyla Nelson recorded half of the team’s steals with four total. Nelson also scored nine points and six rebounds.

Epiteta scored 13 points and recorded two rebounds with two steals. Forward Ariel Colon came off the bench to score a team-high 19 points and went 7-14 from the field while going 3-7 from the three-point line.

The Panthers played another thriller of a game on Friday when they took on FMU. The Panthers got off to a hot start with an 11-5 lead and managed to hold it going into the second quarter of play with a score of 17-15.

The second quarter of action had the lead change four times as FMU scored five straight points. The Panthers fought back and regained a five-point advantage with 2:36 left in the quarter. After one last rally by the Lions to leave the half with the lead, the Panthers scored with six seconds left to go into halftime up 32-31.

The Panthers continued their scoring ways in the third quarter having their biggest lead of the game of eight points. They never lost the lead and went into the final quarter of play, 53-51.

The fourth quarter came down to the wire as FMU scored 10 unanswered points to gain a three-point lead over the Panthers (69-66) with 1:09 left in the game. But with 23 seconds left on the clock, Ekpiteta scored while getting fouled and converted the and-one play giving the Panthers the 70-69 lead.

With five seconds left on the clock, guard Zaida Gonzalez was fouled and scored two from the free-throw line to ice the game and give FIU their first victory of the season.

The Panthers had 34 points coming from the bench with Colon scoring a game-high 22. Ekpiteta also scored double-digit points with 19 and had eight rebounds.

The FIU Women’s Basketball team’s record is now 1-1 as they will travel to face Kennesaw State on Monday, November 15.