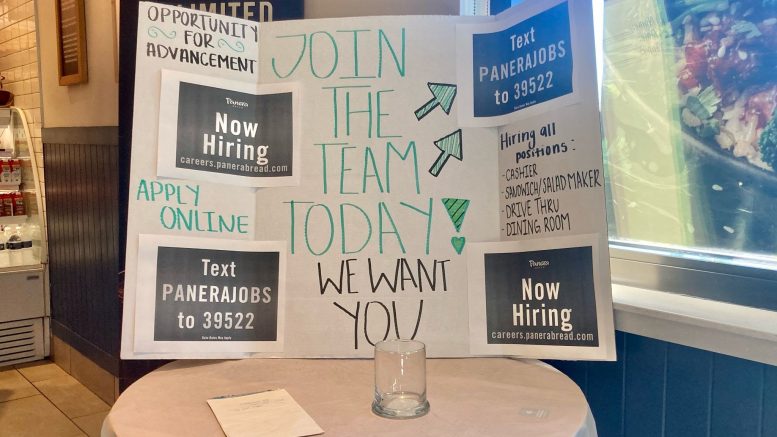 FIU is experiencing a staffing shortage at its dining locations, with a rush to reopen restaurants and hire workers on the spot.

The shortage – which began in September 2020 – is reflective nationwide as the pandemic caused a termination of many in-person jobs and limited work hours.

“We went from 540 [employees] down to 47 at the lowest,” said Paul Johnson, resident district manager of Panther Dining. He referred to March 2020 when only four of the 28 dining operations at FIU remained open at the Modesto Maidique, Biscayne Bay and Engineering campuses.

When the university returned to pre-covid operations, some former employees did not return to their jobs, Johnson explained.

He suspected they would not return because the federal emergency unemployment aid was more competitive than their previous work wages.

“None of them wanted to come back to work,” said Johnson. “It was September 2020 when I first realized this could be a struggle.”

In fact, 66 percent of unemployed Americans “seriously considered” changing their field of work this year, according to a Pew Research Center survey.

However, the struggle to bring employees back continues.

Johnson mentioned a job fair held by Panther Dining during Summer 2021 which only three people attended, two of which were looking to drive buses.

“I love a challenge–and this has definitely been challenging,” said Johnson. “You’d think after 23 years of doing this, you’ve seen everything, but I learned that I have not seen everything.”

“Eighth Street Eatery was getting beaten up at lunch. It was busy, and we had to get ready for dinner,” said Johnson. “And so between 3:00 and 3:30 p.m. every day, I would put on my apron and my gloves.”

He assisted by refilling silverware and cleaning tables alongside Allan Caballero, Panther Dining’s director of marketing and guest experience.

“It was the impact that had on the people that were there to see their leaders coming in to work on site–that’s my biggest takeaway,” said Johnson. “I think COVID brought us together.”

Alyssa Rodriguez, a senior studying psychology, said she experienced the effects of the labor shortage while working at the Graham Center front desk.

“There was a time more towards the beginning of the [fall] semester that we had to pick up extra shifts, but that’s leveled out now,” said Rodriguez.

Johnson says dining on campus is coming back stronger, with the opening of Cabana, FIU’s first original Caribbean cuisine restaurant. and five new dining locations opened since the pandemic.

Cabana had a “soft opening” on Nov. 8 without much promotion and a grand opening on Nov. 15 with steel drum playing and official announcement to the FIU community.

“Our chef knows a chef in Miami from the Caribbean, and so we said, ‘why can’t we create our own [restaurant]?’” said Johnson. “That’s a big change to our businesses because, again, we are kind of stretched rather thin. We don’t want to announce something without delivering.”

Since the pandemic, Panther Dining has invested $80,000 of its funds to implement about 25 new recruitment strategies and incentives including paycheck bonuses and flexible hours.

“People are kind of at a crossroads right now with the COVID situation,” said Cox. “There’s a gap–especially for families who are especially concerned about their kids…they just don’t want to take the risk.”

Cox noted that women make up a disproportionate share of those not returning to work due to a lack of childcare.

606 million women were no longer seeking work in 2020 due to unpaid childcare jobs, compared to 41 million men, UNICEF found.

However, the U.S. has seen a surge in job offers across the nation in October 2021.

“People are starting to return to work, but I think that’s partly been motivated by the fact that these low-paying companies are finally starting to realize they have to raise their pay,” said Cox.

He emphasized the need for more employment options at attainable living wages.

“I think what we need is we need more options for working people so that they’re not forced to take either a very low wage job or trying to compete with the highest reaches,” said Cox. “People usually fall somewhere in the middle, and there doesn’t seem to be any employment for those types of people.”

Letter to the Editor: Healthier options at Fresh Foods

Students should rely on home-cooking rather than restaurants