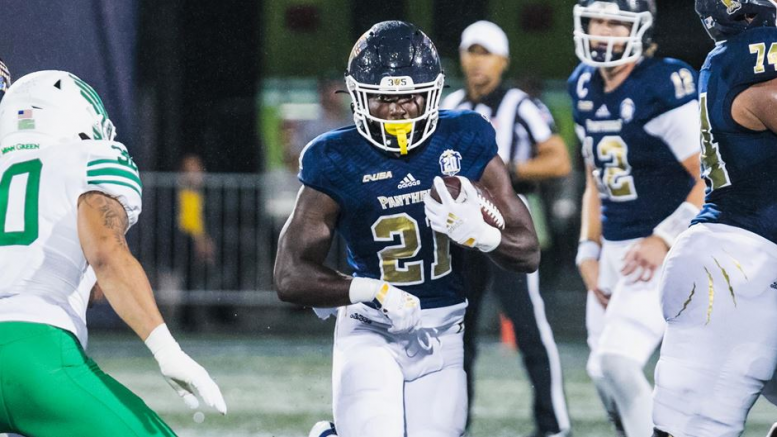 Running back E.J. Wilson Jr on a carry, as he had 16 yards on the ground, splitting the loads with Shaun Peterson Jr. and Lexington Joseph. Photo by FIU Athletics

The FIU Panthers extended their season losing streak to ten games as they were trounced by the North Texas Mean Green by a score of 49-7 in FIU’s home finale.

For the Panthers, it has been a busy week in their football program as head coach Butch Davis announced earlier this week he would not be returing following the conclusion of the season, adding his frustrations on the administration saying they are “sabotaging the program.”

Once Davis took the field on a rainy Saturday night his FIU attire was not seen, instead wearing a t-shirt and hat honoring the military. He was the only coach for FIU in the entire game with no school-related apparel.

However, Davis said postgame that the reason who wore his attire was due to it being military night at FIU Stadium. “Last week everybody else in the country celebrated it, but the administration made us do it this week, “ said Davis. He added “My own father was in the Navy and my uncle was killed in a submarine attack in World War II, so my family has many ties to it.”

As the game began, FIU (1-10) forced a quick three-and-out to North Texas (5-6). Once the Panthers got their first offensive possession of the game, FIU marched down to the Mean Green 5-yard line only for quarterback Max Bortenschalger to be picked off by linebacker Kevin Wood as UNT took it to the FIU 40-yard line.

North Texas quickly answered on four plays as quarterback Austin Aune rushed for 11-yds for the score as UNT got on the board first.

Both teams punted on their next four drives, however with time winding down in the first quarter and the Panthers at a third-and-six, punter Tommy Heathlery converted a fake punt pass that he threw for 22-yards to linebacker Reggie Peterson. The drive stalled as FIU could not find their way to score, punting once again.

With the Panthers offense beginning to struggle, North Texas took advantage, scoring on four straight all through in the second quarter, with quarterback Aune connecting with his receiver Roderic Burns for a 55-yard touchdown and then running back DeAndre Torrey going the distance for a 50-yard score.

Aune would then get his second touchdown pass of the night, finding receiver Khatib Lyles for 35-yards and the second half scoring ended with a second touchdown run for DeAndre Torrey for 1-yd. The Mean Green had the 35-0 lead heading into the break as FIU only put together a total of 35 offensive yards in the second quarter.

After halftime, the Panthers got their first and only score of the night as on the opening drive, Bortenschlager found receiver Tyrese Chambers, who broke off a tackle and took it to the endzone for 60-yards.

North Texas got on the board twice in the 3rd quarter with running back Ikaika Ragsdale getting a 5-yard dash to the end zone and redshirt freshman back Ayo Adei with a 28-yard rushing touchdown. After both scores by the Mean Green, each team did not score again, through the middle of the third quarter and entire fourth quarter with the final score being 49-7.

Following the defeat, coach Davis expressed his thoughts and feelings about the 22 seniors who played in their final home contest, with most having a bulk of the success in the program through the first three seasons under his  tenure at FIU.

“Many of the seniors tonight were the foundation of turning this program around.” This included a program-record of nine wins in 2018, a win against the University of Miami, and making it to a consecutive three-straight bowl wins. Davis adds, “One thing that is very positive about this group is that all 22 seniors graduated.”

Panthers defensive back Richard Dames, a senior who had a career-high in tackles with 13 in the loss, and leads the team with tackles in 91 spoke about the positives he experienced at FIU, besides the struggles of this current team.

“I am going to remember the good times and bad times, I love every guy I have played with including my coaches, especially Coach Davis, and it made me a better man coming to FIU,” Dames said.

Dames was grateful Davis decided to close out the season with the team as he will not be returning next year.

“He could’ve left us after, but he came back, and that’s why I love Coach Davis so much. He showed us to never quit, and next week we will come in with the same energy he had.”

The Panthers will close out the season next Saturday in Hattiesburg, Mississippi against the Southern Miss Golden Eagles. Kickoff is set at 3 pm and can be streamed on ESPN3 while also heard on the FIU Football Radio Network.