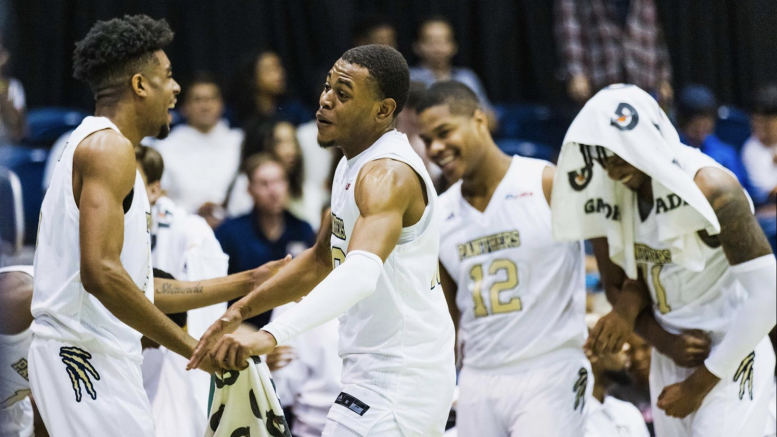 The FIU Panthers celebrate following one of their three straight wins. Photo by FIU Athletics

FIU has now won four straight games in a row following their opening season loss against the Georgia Bulldogs.

The Panthers kicked off with a strong win against the Ball State Cardinals. Both teams came out of the gates swinging, with no team having a solid lead up until the end of the first half. The Cardinals and Panthers were neck and neck, with shots coming from every angle.

After the first half, the Panthers were up 34-28. With a slim lead heading into the locker room, FIU came out even stronger and didn’t look back. Although the game was still close, the Panthers never gave up.

In the closing minutes, the Panthers kicked into fifth gear and beat the Cardinals. The final score was 73-60, and another dominant win for the Panthers against an aggressive Ball State team.

Guard Tevin Brewer had a dominant performance, shooting near perfect from the three point line with five out of six made. Brewer made another 10 points inside the arch for a season high of 25.

Under the basket was forward Clevon Brown, who had another season high of nine rebounds. Freshman guard Denver Jones scored double digits dropping 14 points on the Cardinals with four rebounds and five assists.

The Panthers played their second game of the Jersey Mike’s Classic against the Green Bay Phoenix, getting a last minute win against an aggressive opponent.

The Panther’s next game against the Green Bay Phoenix began with a defensive struggle. The Phoenix were scoring at every chance they had and not looking back. At the end of the first half, the Phoenix were leading the Panthers 31-27.

Although the score was tight, FIU was always trailing until the final moments. Green Bay’s Kamari McGee hit a pair of foul shots to bring the Phoenix within three points, but the Panthers kept the lead in the final four seconds, extending their win streak to three games.

Tevin Brewer one again had an amazing performance with 16 points and six rebounds. Brewer has really shown what the FIU Men’s basketball team is all about, with other players like guard Isaiah Banks following. Banks had another great showing with nine points and five rebounds.

The Panthers last game of the Jersey Mike’s Classic was against the Spartans of UNC Greensboro, FIU’s toughest game yet.

With strong defense and good shot opportunities from the arch, the Panthers keep the game close until the end of the second half. With a wild second half that included seven lead changes and six ties, Spartans’ De’Monte Buckingham made a jumper to even the contest at 65 and send the game into overtime.

With a low scoring overtime period, Brewer hit a clutch three to up the Panthers 74-71, with 3:24 left to play. The strong defense of the Panthers helped keep the slim three point lead and get FIU the win over UNC Greensboro.

Brown scored 18 points in FIU’s close game win over the Spartans, shooting eight for 10 from the floor. Guard Javaunte Hawkins put on a show, scoring 15 points, while Tevin Brewer and Denver Jones both had 14. FIU now has won four straight, a more than impressive start for the Panthers.

The Panthers will return to Miami for their second home game of the season against the North Dakota Fighting Hawks on Wednesday, November 24 at 11am.