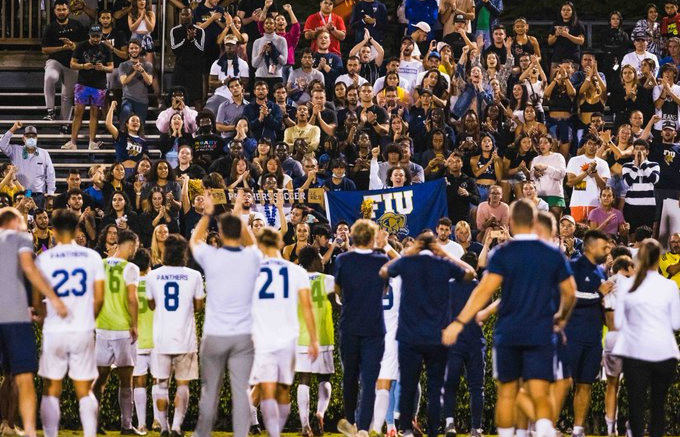 The FIU men's soccer team and Panther fans share a moment following the end of the season. Photo by FIU Athletics

The FIU men’s soccer team dropped out of the NCAA tournament after a 3-2 loss to the Wake Forest Demon Deacons on Sunday, November 21.

The Panthers finish the season with a 12-4-2 overall record and a Conference USA regular season record of 7-0-1. The defeat marked FIUs first loss at home all season.

Panthers head coach Kyle Russell spoke about the result with PantherNOW after the game.

“Unfortunate not to get the result tonight, we had some individual errors which we usually don’t have and haven’t had much of this season,” Russell said. “I’m frustrated with the end result but I’m proud of the boys’ work all season.”

In their first NCAA tournament appearance since 2017, FIU’s hopes for a deep tournament run were crushed by the Demon Deacons in front of a sold out crowd.

A frantic first 15 minutes, FIU and Wake Forest exchanged blows. In the seventh minute midfielder Mauro Bravo fired the first chance of the game just wide of the post. The Demon Deacons hit back in the 12th minute, forcing goalkeeper Tyler Hogan into a stellar save.

The Panthers maintained their pressure for the next 15 minutes, taking four shots in that timespan and maintaining possession. Failure to convert their chances proved costly as Wake Forest sprung a counterattack in the 23rd minute, scoring the opening goal of the game.

After some silky play from Bravo, he was fouled just outside the box in the 39th minute. He placed the resulting freekick into the top corner to level the game at one. Three minutes later however, the Demon Deacons capitalized on sloppy play from the Panthers and converted their opportunity to take a 2-1 lead. Wake Forest remained ahead going into the break.

In the 63rd minute a clever throw-in found midfielder Matteo Gasperoni in the box, stabbing the ball home and leveling the score at two. Just 24 seconds later, Wake Forest took the lead once again after more poor defending from FIU. Despite outshooting the Demon Deacons 18-6, the Panthers couldn’t convert their chances, resulting in a 3-2 defeat.

This was the Panthers final game of the season. Russell said he wants his squad to learn through wins and losses and that tonight will stick with the team for a long time.

“Tonight’s a learning moment, I want them to never forget this, I want them to understand how close they were to a national championship,” said Russell. “I want them to take this in spring and the summer and use this as fuel to motivate them to come back fit.”