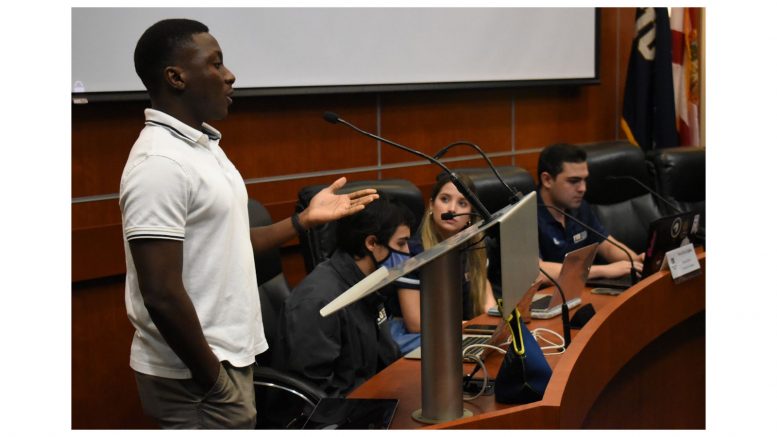 This semester, two Senate meetings have been cancelled because of their inability to meet quorum after a number of senators failed to appear. Repeat absences at Senate meetings have affected the reporting process required of six Senate committees by SGA’s constitution.

About 15 members of the Senate were absent last week, not meeting the 24 senator requirement to meet quorum, a senator told PantherNOW.

“I ask you all to resign if you have not been coming to Senate meetings,” said Luis during this Monday’s session. “It’s as simple as that. It may be controversial, but just resign if you’re not going to be showing up.”

While Senate Appropriation Bill 02004 “Laundry Days with SGA” passed unanimously this week, it was voted on a week later than planned due to the Senate’s inability to meet quorum requirements from senators not attending last week’s meeting.

The legislation appropriates $3500 from the Legislative Line Item–funded by the student activity and service fees–to provide three laundry detergent pods and two dryer sheets to each of the 3,140 students who live in residence halls at the Modesto Maidique campus.

President Pro Tempore Maria Paz Grijalba presented the bill as one which was initially intended to coincide with Housing and Residential Life’s ‘Free Laundry Month,’ which waives washing and drying machine fees in residential buildings from Nov. 15 to Dec. 10.

SIPA Senator Alex Sutton emphasized the importance of attendance in passing timely legislation such as the laundry bill.

“I think that it is extremely important moving forward that we all continue to come to the Senate meetings because there was time-sensitive legislation last week that we were luckily able to vote on today,” he said.

“We already missed five days of the free laundry week, for example, that we could have already been providing those laundry pods and dryer sheets to students,” said Sutton. “I think everybody should think about the fact that we really do have an impact on students’ lives.”

MMC Housing Senator Jacob Bahrat, co-chair of the Student Life and Academic Concerns committee, connected the lack of a report in this week’s meeting to the same attendance issues.

“We have no report because we have not been able to meet quorum for the last few meetings,” he told Senate President Nicholas Pastrana.

Both the Sustainability and Innovation and Student Health and Well-Being committees also did not provide a report.

Karim Mostafa, Kehinde Alawode and Yendy Gonzalez were confirmed as graduate senators and began their terms immediately. Alexander Cobas, who lost an election for SIPA Senator in April, was confirmed to the election board.

Senate President Nicholas Pastrana pointed out that two more elections board members must be confirmed next week to meet the deadline to begin the elections process.

“It’s never happened where we have not elected the election board,” said Pastrana. “Can we be on time? We have no idea what would happen [if not].”