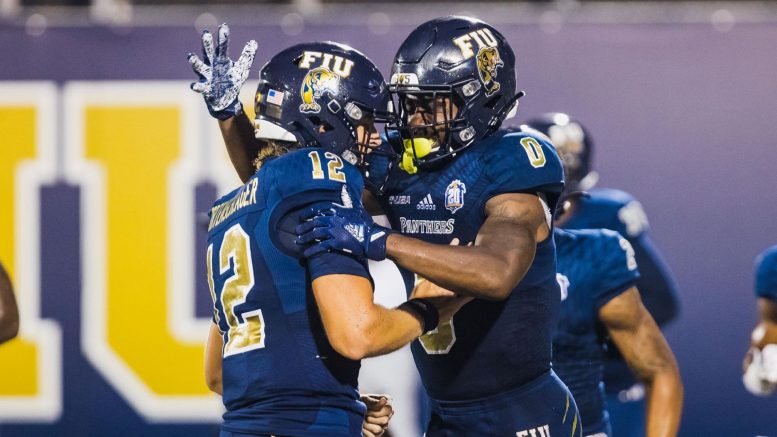 In their last game of the season, FIU football suffered a 37-17 rout by the Southern Miss Golden Eagles in Hattiesburg.

The Panthers found themselves in a hole early courtesy of three turnovers on offense, but managed to fight back and keep the game close for the majority of time. However, missed field goals and the liability to capitalize on Southern Miss turnovers cost them any chance to come back and win.

With the season over, FIU’s record stands at 1-11, with their only win coming in the beginning of the year against the Long Island Sharks- an FCS school. Their last win against an FBS team was against the Miami Hurricanes over two years ago.

FIU’s first offensive drive began hot as quarterback Max Bortenschlager connected with wide receiver Bryce Singleton deep in the red zone, but the ball was stripped and no points were scored for the Panthers.

Southern Miss, which went into the game with a “superback” system on offense, which primarily relies on running backs taking over the quarterback position and primarily running the ball on snap, wasted no time capitalizing on the turnover.

After a few first downs, a long run into the end zone scored the first touchdown of the day for the Golden Eagles. Following an interception by Bortenschlager, a Southern Miss pass to the end zone increased their lead to 14-0.

With the Panthers punting the ball, Southern Miss ran the ball all the way to the two-yard line on the ensuing punt. A handoff secured yet another touchdown in the first quarter for the Golden Eagles.

The offensive miscues by FIU carried on as a fumble at midfield gave the ball right back to Southern Miss, but a long throw by the Eagles was intercepted by defensive back Richard Dames.

Bortenschager then threw a 91-yard pass to Chambers to secure a touchdown for the Panthers. FIU scored once more following a rush by running back Lexington Joseph to cut the deficit down to 21-14 which remained all the way to halftime.

The third quarter was low scoring, with only a field goal by both schools being exchanged, raising the score to 24-17.

In the final quarter, offensive and special teams miscues by both FIU and Southern Miss kept the game close. However, two straight touchdowns by the Golden Eagles extended their lead to 37-17 to close out the game.

This is also the final game coached by Butch Davis for FIU football, as the search for a new head coach (as well as a new athletic director) is likely to begin in the coming days or weeks.