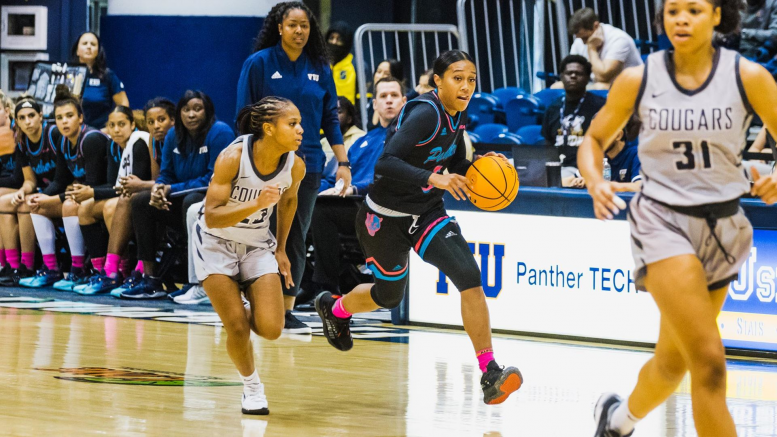 Guard Grace Hunter taking the ball up the court for the Panthers. Photo by FIU Athletics

The FIU Women’s Basketball team was home this week during the annual FIU Thanksgiving Classic, beating both the Chicago State Cougars and the Eastern Michigan Eagles.

FIU showed off their new Vice City threads during their matchup against CSU who they defeated in an unrelenting fashion with a final score of 64-46.

The Panthers came out of the gate red hot, shooting an incredible 81% from the field with 12 points off turnovers giving FIU a 19-7 lead going into the second quarter.

On the defensive end, FIU made the Cougars struggle with tenacious off-ball pressure causing them to shoot 2-of-15 from the field as well as creating 11 turnovers. The Panthers also dominated the paint with 24 points giving them a comfortable 33-17 lead heading into the second half play.

The Blue & Gold continued applying pressure throughout the third quarter creating a lead of up to 21 points with five minutes left to play in the third. CSU didn’t give up however and showed grit while going on a large run, cutting their deficit to 45-38.

In the final quarter, the Panthers once again pushed the pace offensively going on a 14-0 run while grabbing several key offensive rebounds that crushed the Cougars chance of a comeback.

FIU held its lead for 37 minutes and sealed the win with 26 points off the bench while holding CSU to a measly 26% shooting from the field with 19 turnovers.

Notable performances included forward Kyla Nelson and forward Emerald Ekpiteta who led the team in scoring at 12 points alongside forward Ariel Colón with 11 points, guard Grace Hunter with 10 and guard Tanajah Hayes with 10.

FIU’s center Maria Torres also helped out the team by getting a team high eight rebounds with Ekpiteta getting seven.

In the Panthers next outing, they faced the Eastern Michigan Eagles where they managed to secure the win 67-60 in a back and forth battle that kept players on their toes.

During the first quarter, both teams were exchanging buckets, but FIU’s three threes on 50% shooting helped them gain a 15-14 point lead heading into the second quarter.

The Panthers proved to be lethal offensively in this quarter as they proceeded to outscore EMU 27-11 thanks in part to seven three-pointers and constant defensive pressure. After going on a 10-0 run in the latter part of the half, the team was able to take a 42-25 heading into halftime.

The Blue & Gold seemed to slow down a bit both offensively and defensively in the third as the Eagles were able to rally and go on a large run, cutting their deficit to a score of 51-45 at the end of the quarter.

With 8:24 left to play in the fourth, EMU managed to get within two points of tying the game but FIU kept battling and eventually went on a 6-0 run putting them at a 58-50 advantage. Nelson then hit a dagger three to top off a season-high 19 points and seal the win for the Panthers.

FIU had a total of 11 threes for the game on 48% shooting with five coming from Nelson. Guard Zaida Gonzales had 14 points and Colón had 12 points coupled with a team high five rebounds.

Hayes and guard Olivia Trice also exhibited their efficiency in distributing the ball as they both came up with a team-high 4 assists alongside Hayes’s three steals and Trice’s two made threes.

FIU now holds a record of 4-2 for the season and will play at home this week facing the Jacksonville University Dolphins on Tuesday Nov. 30, and the University of North Florida Ospreys on Saturday Dec. 4.