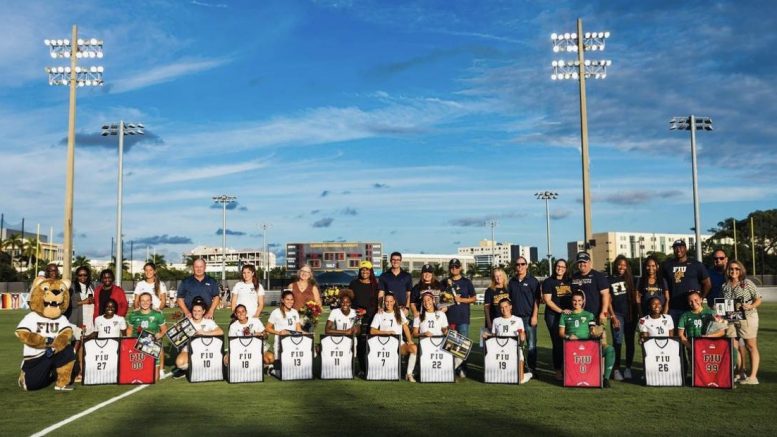 The FIU Women’s Soccer team ended their season with a defeat at home. The Panthers qualified sixth place in the Conference USA Eastern Division. The season wrapped with FIU scoring 14 goals this season, while their opponents scored 34 goals overall.

This is the second season led by Jonathan Garbar as head coach.

The Panthers lost their good luck in the game against the Jacksonville Dolphins, after nearly ending the game in a draw, but due to a late goal performed by the Dolphins, the game ended in a loss, taking home a 3-2.

The Dolphins scored two goals within the span of three minutes. However, the Blue & Gold managed to keep their heads up and came back stronger in the second half, midfielder Elli Kainulainen scored FIU’s first goal on minute 47.

During minute 60, forward Noemi Paquin tied the game by scoring the second goal. The Panthers were defensive and dominated possession in the second half; however, the Dolphins scored their third goal on minute 85, making the game 3-2.

FIU hosted a game against North Florida’s Ospreys on August 26, losing another game.

Though the game seemed underwhelming, the Panthers and the Ospreys were even in moves, making the first half of the game scoreless.

During the second half, FIU entered recharged on the field, putting more pressure on their opponents, five players from FIU had a shot on goal. The game was taken to overtime, and the Ospreys scored a goal on minute 90.

FIU Women’s Soccer team was defeated by the Lipscombs in a game where the result was 1-0. The game was held on August 29.

The Panthers had a strong defensive lead, giving the Lipscombs a tough challenge. The Lipscombs scored their first goal on minute nine of the first half.

FIU had four shots on goal, while their opponents doubled this number. Goalkeeper Ithaisa Vinoly recorded seven saves in total during this match.

Despite losing, the Panthers performed well and gave the Lipscombs a hard time, making this their lowest scoring game.

The Panthers lost 3-2 to FGCU in the first game of December.

The match started on a positive note, with defender Nikole Solis scoring a goal in the third minute, giving FIU an early advantage. The FGCU Eagles didn’t stay back, and scored two goals in the first half.

After the half time, the Eagles managed to score another goal in minute 52. Forward Sydney Amparo scored FIU’s second goal on minute 85, with an assist from midfielder Jessica Magerman.

FIU Women’s Soccer carried on with their losing streak after losing to Murray State University 2-1 on September 9.

Murray State’s Racers scored their first goal only seven minutes into the game. The Panthers held a good offensive performance to their rivals and attempted to score a goal three times in the first half but were unsuccessful.

In the second half, Courtney Walker scored FIU’s goal with an assist from Amparo. The Racers fought back and scored their second and final goal in minute 58. Kane saved three shots in this match.

The Panthers had a disappointing game against the Miami Hurricanes, taking a 3-0 loss on September 9.

The defense was weak on this occasion, allowing the Canes to take advantage and score their first goal on minute 24. During the second half, FIU’s opponents scored two more goals in less than ten minutes.

Johnson led the shots at goal by attempting to score a goal two times, followed by Paquin, Magerman, and forward Farah El Tayar.

The Blue & Gold lost once again on September 12, when they faced the App State Mountaineers by a 1-0 score.

The final non C-USA game seemed like a possible win when Amparo took a shot at goal early in the first half, however, the Mountaineers scored a goal in minute 24, taking the lead of the game.

Johnson took a shot at goal but it was blocked by the crossbar. Amparo joined in and took the most shots at goal by an FIU player during this game.

Towards the end of the game, FIU became more aggressive, with Idelys Vazquez taking a shot at goal.

FIU’s first C-USA game this season ended in a defeat from Middle Tennessee on September 16.

The game had a strong defense from both teams, in minute 15, Magerman scored FIU’s first goal with a pass from Vazquez.

On minute 39, the Blue Raiders scored their first goal. Both teams walked into half time break with one goal.

After halftime, Kane saved a goal in minute 51. Magerman took a shot at goal in minute 71, just before FIU’s rival scored their second goal. In minute 78, Paquin scored with the help from Carmen Marin, tying the game

The game had to be taken to overtime, where the Blue Raiders scored their third goal in minute 107. What seemed to be a good result for FIU changed in a matter of minutes. The game concluded with a 3-2 result.

The FIU Panthers held a home game on September 19 against longtime rivals, the Florida Atlantic Owls. The game resulted in a 1-1 draw.

This game was arguably one of the best performances by FIU this season. Paquin scored a goal for her team in minute 13, while Vinoly saved several shots at goal from the FAU Owls.

The second half of the match started with Reagan Bridges taking a shot at goal, followed by more saves from Vinoly.

In minute 71, the FAU Owls scored their goal to tie the game. FOllowing an overtime period in which no one scored, the match ended in a draw.

The Panther’s game against Marshall on September 24 ended with no goals from either team, FIU’s second straight draw.

After the halftime break, a penalty kick was granted to FIU. Munoz Danon was in charge to kick the ball, but Marshall’s goalkeeper made a crucial save.

Vinoly recorded four more saves. The game went into overtime, but neither team could score a goal.

FIU broke the tie-streak on October 1, when they played against the Charlotte 49ers and lost 4-1.

The game started in a harsh way for FIU when the 49ers scored their first goal in minute six, and then scored their second goal only ten minutes later.

In minute 42, the Panthers scored, Paquin took the game in a different direction.

After the halftime break, the 49ers came back stronger and scored two more goals in just five minutes. By minute 70, the game was already 4-1.

The game against the North Texas Mean Green on October 8, was probably the toughest defeat this season, with a shocking result 5-0.

The Mean Green’s performance was significantly better than the Panther’s. The first goal was scored in minute seven, followed by a second goal in minute 15. With no shots at goal from FIU, North Texas scored their third goal in minute 21.

Amparo took the first shot at goal in minute 24, but it was saved by the opponent’s goalkeeper. The Mean Green scored their fourth goal in minute 30.

In minute 40 and 41, Amparo attempted two shots at goal. In minute 44, the North Texas Mean Green scored their fifth goal.

After the halftime break, the North Texans went with a huge advantage and confidence, however, no team scored any goals in the second half.

In minute 27, FIU was awarded a free kick, Cardona launched the free kick into the box where it was accidentally hit by a Hilltopper, causing an own goal. This turned the game to a 2-1 score.

After halftime, Paquin scored a goal in minute 67, making the game a 2-2 tie. This was Paquin’s fifth recorded goal this season. Towards the end of the game, Magerman attempted two shots at goal.

The game was extended to overtime in which the Hilltoppers scored their third and final goal in minute 94, winning the match.

FIU had a victory on October 22, when they won a match against Old Dominion 1-0.

Paquin and Munoz Danon were attacking the field by attempting shots at goal early in the first half.

During minute 12, Cardona launched a pass that deflected off an ODU player into the net for an own-goal, to send FIU into the break clinging to the 1-0 advantage.

Vinoly saved five goals during the entirety of the match. Camille Sahirul, Munoz Danon, Cardona, Deborah Bien-Aime, Vazquez and Bridges all played the 90 minutes of the game.

FIU played their final game of the season on October 28 against LA Tech, losing 4-0.

The Panthers performed a great game against the Lady Techsters during the first half, with a few shots at goal from each team; however, both teams walked into halftime with a scoreless result.

During the second half, LA Tech scored their first goal in minute 49. In minute 60 they scored their second goal, and just seconds later, Johnson was given a yellow card.

On minute 62, FIU was granted a penalty kick. Paquin decided to take the opportunity, however, the ball was saved and they remained with no goals.

During minute 69, the Techsters scored their third goal, having a big advantage from FIU. On minute 78, the LA Tech team scored their final goal, making the game 4-0.

Despite having an unfortunate season, Coach Garbar and the Women’s Soccer team remain enthusiastic about next season.

The Panthers were close to celebrating victories, but ended up being affected by overtime and poor strategy on the field.

With two unsuccessful seasons, head coach Jonathan Garbar will try to make the most out of next season, helping the women’s soccer team on and off the field.

The Blue & Gold will have some time off to practice and reflect on what they have done wrong.