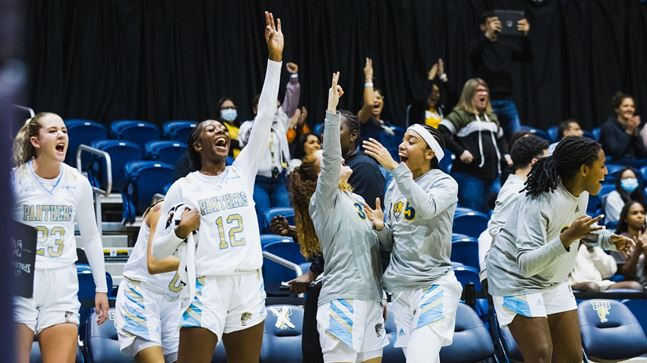 The Panthers bench cheers for their teammates as they played Ave Maria. Photo by FIU Athletics

The FIU Women’s Basketball team ringed in the new year with two straight wins in a two-game home series versus the Ave Maria Gyrenes.

The Ave Maria double-header was added after the originally planned Conference USA game scheduled for January 1st versus the Charlotte 49ers was postponed due to COVID-19 protocols.

On Saturday, The Panthers scored 11 unanswered points to start the game and ended the first quarter with four three-pointers made and an advantage of seven points (18-11).

The Panthers were a force to be reckoned defensively scoring 17 points off turnovers and had success off the bench with 20 points during the second quarter of play which ended with FIU ahead with a demanding score of 44-27. They would not let go of their lead at any point in this game as their dominance continued in the second half.

The fourth quarter had the Panthers leading the Gyrenes by 27 points, their highest lead of the game, on two occasions. The final score was 78-53.

The Panthers defense came up big forcing 28 turnovers and converting those turnovers into 32 points. The Panther’s defense also recorded more steals (18) than the Gyrenes (4) with guard Tanajah Hayes leading the team with a season-high five steals.

On the offensive end, the Panthers racked up 34 points in the paint including 18 second-chance points coming off of 23 offensive rebounds. Four Panthers scored double-digit points as forward Ariel Colon led the team with 17 followed by Hayes scoring 11 and forward Kyla Nelson scoring 10 along with guard Raquel Ferrer-Bernard.

On Monday, game two of the doubleheader started off close with both teams trading buckets to start the first quarter. The Panthers found much of their success in the paint scoring 14 of 19 points to head into the second quarter with the lead (19-16).

The second quarter was the first time that the Gyrenes gained the advantage in this double-header as they got off to a quick start. The lead was short-lived as the Panthers answered back and went on a nine-point run in the closing minutes to go into halftime with a score of 33-24.

The second half was controlled entirely by the Panthers, specifically their defense. They drowned the Gyrenes with relentless pressure, orchestrated by Coach Burks’ use of the full-court press which forced many turnovers that turned into extra points.

The Panthers led the game in steals with 17 and converted 20 second-chance points. The Panther’s bench also outscored the Gyrenes 25-14.

The FIU Women’s Basketball team improves their record to 8-3 as they continue their five-game homestand against the Western Kentucky Hilltoppers on Saturday, January 8.