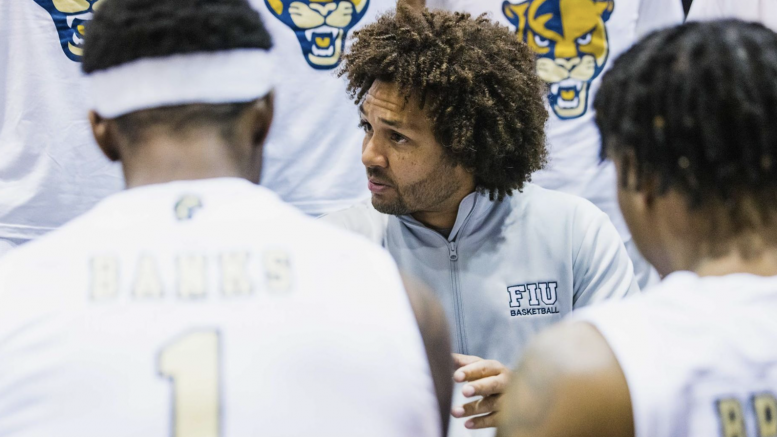 Coach Jeremy Ballard talking to his team during a timeout. Photo By FIU Athletics

This drops their overall record to 10-7, in which six of their losses were on the road. The Panthers also have yet to defeat a C-USA opponent.

Last year, when FIU and Western Kentucky faced off, the Panthers lost both of those games by 30 or more points, so they knew Western Kentucky was going to be a problem coming into the game on January 8.

The game started out evenly paced, with many different players scoring and getting their chance to shine. Both the Panthers and the Hilltoppers played aggressively, causing a few fouls and getting easy points off the foul shots. By the end of the first half, Western Kentucky was up by five in an intense 43-38 game.

In the start of the second half, things took a turn for the worse. FIU was having sloppy offensive plays, and defensive breakdowns mixed with fouls caused a lot of shots from the line for Western Kentucky.

The Hilltoppers were defeating FIU from the arch and on defense as well. Even though both teams were scoring, Western Kentucky was scoring at a much rapid pace, ultimately winning the game 84-71.

Players from both teams had phenomenal games. FIU center Seth Pinkney tied his season high in points scoring 10 against the Hilltoppers, with guard Tevin Brewer adding 20.

The Panthers then traveled down to UAB on January 13. The Blazers were 2nd in the C-USA West with a record of 3-1, now 5-1, in their conference.

The Panthers started off the game strong, looking promising from the moment of tipoff. FIU’s defense was in the zone and they were clicking on offense. The Panthers took a small 11-point lead in the middle of the first half, but could not keep the lead going. The Blazers ended up coming back and closing out the first half 39-34.

UAB took control in the second half with a 19-point run in the first four minutes. Now leading FIU 53-36, the Blazers were feeling it. As for the Panthers, they couldn’t seem to come back to life. UAB’s lead was growing, while the Panthers just stumbled and couldn’t get their shots to fall.

What seemed like a strong start and promising game against one of the toughest opponents in the conference soon came crashing down as the second half started. UAB closed out the game winning 84-56, with their biggest lead being by 30.

Both Brewer and guard Denver Jones had great games, with each player scoring 17. Jones was also perfect from the free throw line.

The final stretch of the three-game road trip was in Murfreesboro, as the Panthers took on Middle Tennessee. The Blue Raiders were coming off a win against the FAU, beating them by 17 points.

Both of the teams were falling short of scoring in the beginning and it was a true battle of defense. Middle Tennessee had bursts of points, where they scored 10 points in a short range of time, unlike FIU who was scoring at a steady pace.

Regardless, MTSU always had the upper hand. FIU took the lead near the end of the first half, but then lost it on the next possession. The Blue Raiders closed out the half 25-20.

Similar to the prior game, FIU was sloppy in the second half, going on a five minute drought with no points, giving MTSU every chance possible to take advantage. Seeing the opportunity, the Blue Raiders took a lead and didn’t look back. Middle Tennessee would close out the game 50-39.

In the start of the season, both FIU and MTSU were battling it out for first place. Fast forward a month later, and now FIU is 0-4 in conference play, and MTSU is sitting at a safe 2-2, being in third place in the C-USA Eastern Division.

As the season goes on, there is less and less time for the FIU Men’s basketball team to improve. The Panthers now fall to last place in the C-USA East after starting their season off with an 8-1 record.

FIU will return home on Thursday, January 20 to take on the Marshall Thundering Herd at 7pm. They then will stay in Miami for another game against Western Kentucky on Saturday, January 22 at 7pm.