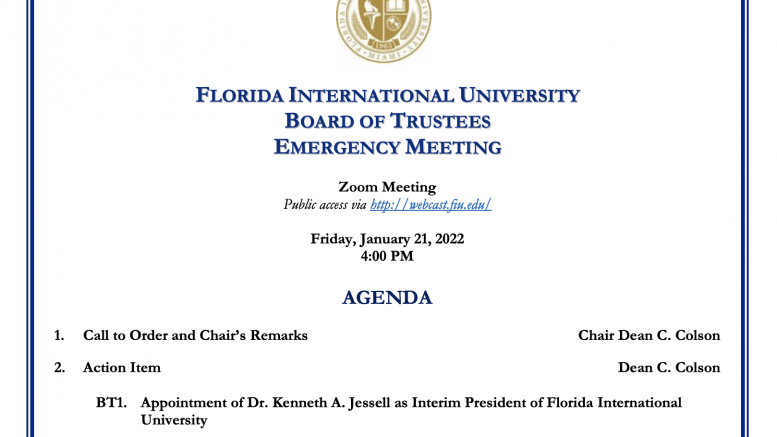 Kenneth A. Jessell, FIU’s chief financial officer and senior vice president for finance and administration, will be announced as interim president today in an emergency board of trustees meeting.

It is still unknown why FIU president Mark B. Rosenberg is stepping down after 13 years.

As FIU’s fifth president, Rosenberg is the first to previously work as faculty. He began his FIU career in 1976 as a political science professor, and founded the FIU Latin American and Caribbean Center.

The public can access the meeting via webcast. The board of trustees website was updated with the emergency meeting agenda today.

Jessell served as senior vice president for finance and administration and chief financial officer since 2009 until now. He managed financial, facility and business services for FIU in that position, and also taught finance in the college of business administration.

He is responsible for the management and administration of financial, facility, and business service operations of the University. Jessell is also a Professor of Finance in the College of Business Administration at Florida International University.

This story will be updated as more information becomes available.

Dean C. Colson, FIU Board of Trustees Chair, released a message to the University community.

“I am writing to share with you that I have accepted the resignation of President Mark B. Rosenberg,” said Colson. “I look forward to working with the entire university community as we search for our next President…I can assure you that our next leader will be committed to that mission.”

FIUNews published President Rosenberg’s resignation, in which he discusses his resignation as being due to his Wife’s poor health.

“I am stepping back so that I may give full attention to recurring personal health issues and to the deteriorating health of my wife, Rosalie.”

Update as of 4:17 pm: Dr. Kenneth Jessel, who previously served as Chief Financial Officer for FIU, was unanimously confirmed as interim President. Dean Colson said he expected the national search for a new president to take “4-6 months”. Trustee Carlos Duart, who was appointed to the board late last year, described Jessel as a “man of integrity”.

Editorial: “Play fair: that’s not how you get things done”