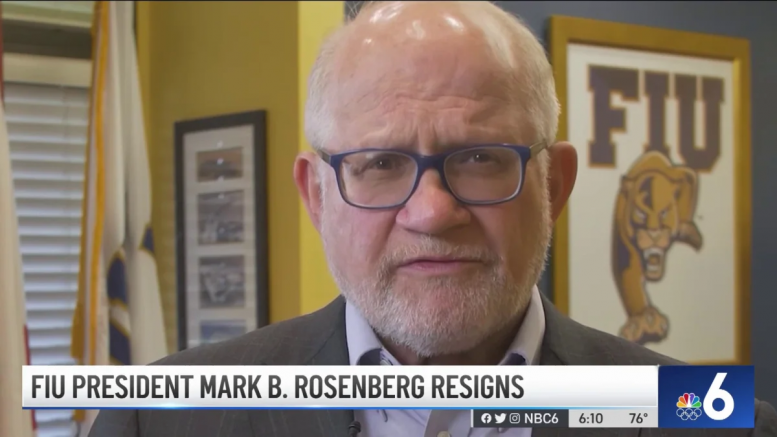 Screenshot of NBC 6 coverage of Mark B. Rosenberg’s resignation.

Two days after Mark B. Rosenberg’s abrupt resignation from FIU, a sexual harassment complaint has challenged both the University’s and former President’s initial statements over his departure.

The original announcement of his resignation, released on Friday, Jan. 21, centered both his and his wife’s health as the cause.

The former President’s statement to the University on Sunday uncovered the reason behind the sudden end of his 13-year tenure leading FIU.

Rosenberg sought mental health counseling in the wake of his wife’s declining health in October 2021. He admitted that the situation spilled over into the workplace and caused “discomfort for a valued colleague,” according to the statement.

“I unintentionally created emotional (not physical) entanglement. I have apologized,” he stated. “I take full responsibility and regret my actions.”

However, an anonymous source told CBS4 that Rosenberg’s resignation came after an internal investigation looked into a complaint of sexual harassment filed against him by a female FIU employee in her 20s.

The harassment complaint against him involved several forms of communication, including text messages.

“There is an internal massive investigation into this,” said the source to CBS4. “It was not a consensual relationship. It was harassment.”

Following the inquest, Dean Colson, Board of Trustees chair, presented the 72-year-old President with an ultimatum: resign or be terminated.

“Mark Rosenberg is not at the university because of his own doing,” said the source.

Rosenberg said in his statement that he disclosed the situation to the university and agreed with Colson over his resignation.

“I regret that I may have burdened you with these details,” he wrote in the statement. “We all want the same thing: a better, more robust and thriving FIU.”

Colson said the board did not feel comfortable remarking on Rosenberg’s accomplishments during the emergency meeting on Jan. 21, according to the university-wide email that included Rosenberg’s statement in full.

“We are deeply saddened and disappointed by the events requiring his resignation,” read the email. “Due to employee privacy considerations, FIU is not going to comment further at this time.”

As previously reported by PantherNOW, Jessell will serve in the interim until a national search for a permanent successor concludes.

In the emergency BOT meeting regarding the resignation on Jan. 21, Trustee Colson said he expected the search to take four to six months.

Rosenberg intends to return to FIU as a faculty member and continue research and teaching on inter-American affairs and higher education, according to the initial letter to the University marking his resignation.

Additional reporting was provided by Elise Gregg and Maya Washburn.