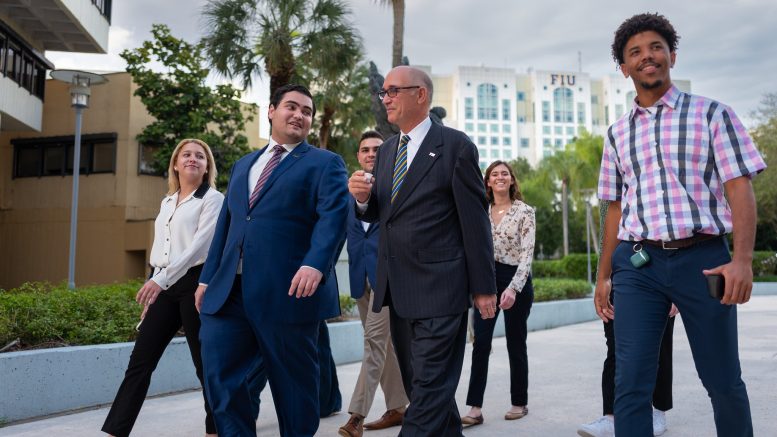 Despite the workplace harassment allegations against the former FIU president, our Student Government Association members have stayed silent on the matter. This includes the leadership of both the Legislative and Executive branches of FIU’s SGA.

FIU’s former president, Mark Rosenberg, abruptly resigned amid workplace harassment allegations on Friday. While the FIU community is still processing the news and the internal investigation is ongoing, various university clubs and organizations have issued statements regarding Rosenberg’s resignation and expressed support for the alleged victim of the situation.

It is unacceptable for SGA members to remain quiet about this serious situation, especially considering their proximity to Rosenberg. As our community leaders, they should have been the first to issue statements regarding the alleged sexual harassment towards a female employee of FIU. Although this is still an allegation, SGA should still comment similarly to other clubs and organizations at the university.

SGA has a finalized statement, according to SGA President Alexander Rubido. They will be posting it within the next 24 hours.

It’s because of the role they serve and “the nature of the situation,” said Rubido. On the day Rosenberg resigned, photos of a meeting between SGA and the interim president, Kenneth Jessel,  were posted onto FIU’s Flickr account. Yet, they have not taken the time to publicly address the issue that led to the appointment of his presidency.

As of Monday, the SGA President, Alexander Rubido has not publicly commented on the allegations. Since April, he has served as president of SGA and as a member of the FIU Board of Trustees. Despite appearing at countless events, games, and photoshoots with Rosenberg throughout his presidency, Rubido has not made a statement regarding the issue.

SGA Vice President Alexandra Nicole Ibarria has remained quiet. As a female leader in one of the most powerful positions in SGA and as a member of the Phi Sigma Sigma chapter at FIU, it would be imperative for her to address Rosenberg’s alleged actions. Our community expects members of the Phi Sigma Sigma sorority to promote sisterhood, integrity, strength and the advancement of womanhood. Even at such an early stage in the investigation, SGA leadership needs to provide consolation to the community they serve.

“I am working on the general SGA statement, and that will constitute mine,” said Ibarria.

Is this the type of leadership we deserve on campus? The Student Government Association cannot be the last organization to address the claims. They should have been on the front lines of the scandal. Any response they issue now will be untimely and unfitting.

Bryan Gomez, a member of SGA, wrote a statement regarding the allegations for his fraternity, Theta Chi, and later reposted it onto his Instagram story.

“We wish [Rosenberg] and his loved ones well as they handle serious health issues,” reads the post. “but [we] cannot and will not condone the serious ethical and moral wrongdoing he admits to.”

Gomez says he fully stands with this statement.

Gomez is also trying to post a similar statement for the Future is You, a student-run political party,  but is waiting on a request to be approved by the elections board. This is usually done to ensure posts don’t violate the election’s code, which states parties can not campaign outside of election season.

While it is understandable that SGA members are not solely responsible for making official statements, they are still in charge of their personal accounts and platforms.

“As a President of SGA and a Trustee, whenever I put out a message on my personal account, it can, and usually is, understood to be on behalf of the organization,” said Rubido.

While lines can get blurred between a person and the position they hold, it is possible to distinguish and make it evident that what you post is your opinion and your opinion alone.

The FIU community needs to consider how SGA handled these issues in the wake of the new 2022 election cycle for SGA. It’s time to elect new parties and candidates.

SGC-BBC budget cut for third year in a row