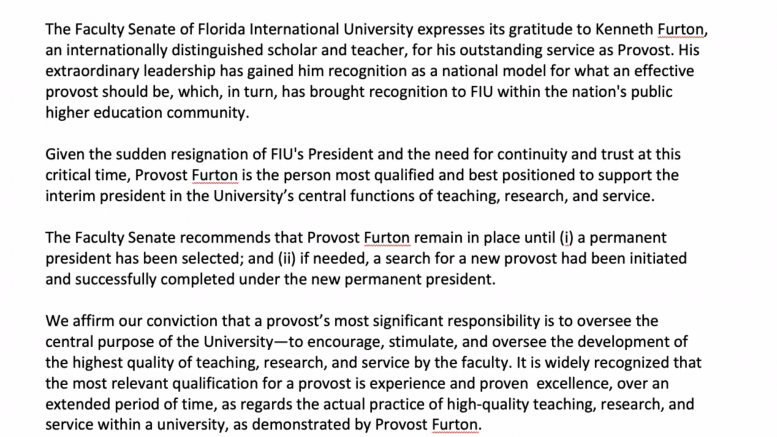 The FIU Faculty Senate passed a motion on Jan. 25 to reappoint Dr. Kenneth G. Furton as provost until a permanent university president is announced.

“Given the sudden resignation of FIU’s President and the need for continuity and trust at this critical time, Provost Furton is the person most qualified and best positioned to support the interim president in the University’s central functions of teaching, research, and service,” read the motion.

Furton served as provost for seven years before stepping down last December. Currently, he serves as FIU’s Chief Scientific Officer, Executive Director of the Global Forensic and Justice Center and Provost Emeritus.

At the moment, FIU doesn’t have a provost, a position normally appointed by the president.

Senator Victor Uribe, chair of the university’s history department, presented the motion and the senate passed it unanimously.

During the meeting, faculty senate also passed a motion condemning sexual harrasment in the university following an investigation into former president Mark B. Rosenberg that led to his resignation.

“While the university explicitly forbids such discriminatory and traumatizing actions, FIU cannot tolerate a culture in which sexual harassment is quietly allowed,” read the motion.

Despite the overwhelming support of several senators, the motion did not pass unanimously.

The senate also removed the Global Learning designation from two courses Intro to Urban and Regional Studies and ESOL Methods for Grades K-12.