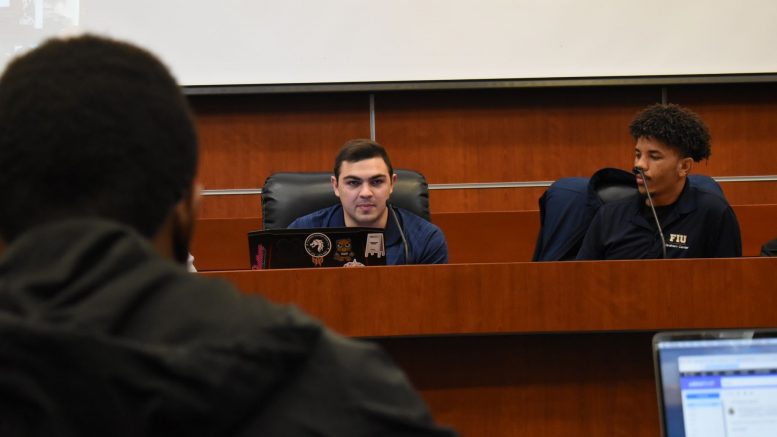 FIU student organizations might face budget cuts ranging from 5 to 15 percent next year.

The university’s Student Government Association discussed possible cuts to student organizations during a senate meeting on Jan. 24, citing the likelihood of a reduced budget for the next fiscal year.

“We know that we’re going to have less money than last year,” said Nicholas Pastrana, Senate President. “So we asked the question: what do you do with the five to 10 to 15 percent deduction?”

Pastrana said approximately $13-17 million would be made available to student organizations and centers in next year’s budget following a likely decrease from the current one.

Five of the six standing committees comprising the Senate failed to present reports at the meeting, owing to an inability to find dates and times to meet three weeks into the semester. Only the Academic and Student Life committee has met so far to discuss initiatives.

Alexander Sutton, School of International and Public Affairs senator, said the position was recently resigned by a senator confirmed at the end of the fall semester.

PantherNOW previously reported 13 Senate vacancies, leading SGA President Alexander Rubido to issue an executive order decreasing the amount of senators required to meet quorum and vote on legislation. Graduating senators and resignations were reportedly the cause for the vacancies.

Pastrana assured SIPA senator David Luis, who inquired about the judicial branch, that applications to fill the positions would be completed by Monday, Jan. 31.

SGA has operated as one party–Future is You–since former SGA President Alexandra Valdes filed election violation claims against opposing political party Roar! In April of 2020, leading to the party’s disqualification by the judicial branch.

The sudden resignation of former university President Mark B. Rosenberg was also addressed during the public forum period by a student regarding a recent PantherNOW opinion column concerning a lack of a statement on the matter by SGA.

“SGA has not put out a statement yet because we cannot go off of what social media says,” said Pastrana. “It is not that the student government is ignoring this…we are just as heartbroken over the situation as you are.”

However, the complaints against former president Rosenberg were made public by the university and widely reported by local and national media in days prior.

Candidate applications will open on Jan. 31 and run until Feb. 11, with results expected within 48 hours of the election’s end on March 9.