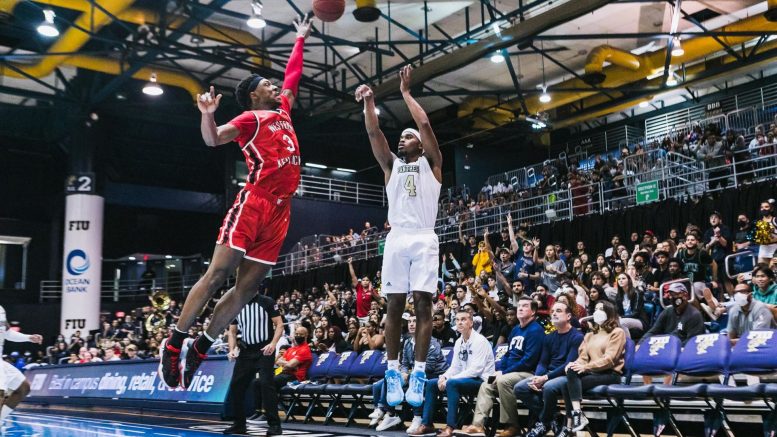 The FIU Men’s Basketball team has rebounded following three straight losses on the road, winning two straight games at home this past week against the Marshall Thundering Herd and Western Kentucky Hilltoppers.

It was an offensive duel between FIU and Marshall from the first minute of the match, mostly between the Panther’s guard Tevin Brewer and Marshall’s Taevion Kinsey. Marshall opened fire from the area, while FIU took advantage of Brewer’s ability to score at both close and long range.

Both forward Clevon Brown and guard Javaunte Hawkins were in charge of keeping Marshall’s offense off the scoreboard. Due to turnovers by both schools, the first half was relatively low scoring, with the Herd holding on to a 31-29 lead at halftime.

FIU limited their turnovers in the second half, which helped them both take and expand their lead on a 10-point scoring spree. In addition, the Panther’s success with rebounding the ball – 44 total – helped them build a lead that Marshall couldn’t handle in the final minutes of the game.

FIU was 46.7% on field goals, in addition to going over 55% on three pointers, a statistic purely increased by the two playmakers of the team, Brewer and Hawkins.

The Panther’s next game against Western Kentucky was just as close, with FU ultimately pulling off a 86-83 lead. Following an even first half, the Hilltoppers turned up the heat in the middle of the second. In a back and forth affair, some last-minute baskets by Hawkins and guard Eric Lovett decided the game.

Scoring 51.61% on field goals in the first half, led by Brewer and Lovett, allowed FIU to take and hold the lead, along with 38 more points provided by the Panther’s bench.

The Panthers now have an overall record of 12-7 and are 2-4 in Conference USA. FIU Men’s Basketball will now head on the road for two straight games in the Lone Star State, starting with the Texas-San Antonio Roadrunners on January 27 at 9pm, then the Texas-El Paso Miners on January 29 at 9pm.