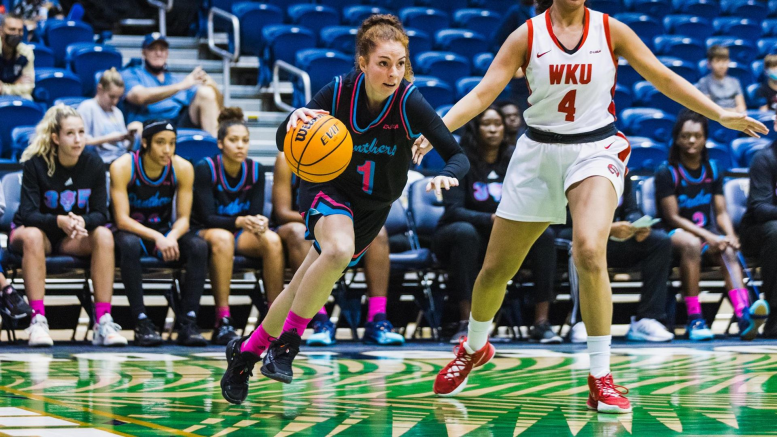 On Thursday night, the Panthers squared off against the Bisons, battling tooth and nail until the final seconds of the game.

The team had a rough start as they struggled to stop Marshall on the defensive end, handing them an 11 point lead heading into the second quarter.

Their offensive luck turned around in the second as FIU was able to create 18 points that would reduce their losing margin to 25-35 heading into the second half of play.

The Panthers continued to struggle defensively going down to Marshall 38-51 with 3:52 left in the third. However, FIU showed resilience and fought back, going on to outscore the Bisons 28-14 by the end of the third.

With a score of 38-51 heading into the final quarter of play, FIU needed something big to keep the game competitive. The Panthers went on to lock Marshall down, holding them to 11 points during the final 10 minutes while putting up 21 points themselves in 62% shooting.

Being within six points in the final 45 seconds, FIU Forward Kyla Nelson was able to convert on an and-one and give the Panthers a fighting chance to win the game. However, Marshall sank three of their own free throws, sealing the game away 59-62.

Despite their loss, the Panthers did have some notable performances by the likes of guard Tanajah Hayes and forward Ariel Colon as they both scored 11 points alongside Nelson who had eight points and five assists.

On the glass, forward Emerald Ekpiteta secured a total of 11 rebounds and forward Maria Torres had a season high of five blocks during the game. FIU was also able to force 19 turnovers, 11 of which were steals.

In their second outing on Saturday against WKU, the Panthers once again fought hard but fell to the C-USA contenders in the last quarter of play.

Despite their hot start, FIU started to fall to Western Kentucky’s relentless offense, finding themselves down 30-45 at the end of the first half.

The Panther came out determined in the third quarter as they outscored the Hilltoppers 20-11 keeping them at bay with their 25% shooting from the field. FIU also beat up WKU’s defense in the paint outscoring them 12-4 in the third.

At the start of the fourth quarter, FIU was nearly caught up to WKU being down by only six with a score of 50-56. This proved to be short lived as WKU was able to go on a strong run giving them a lead that the Panthers could not catch up to.

The bout ended with a final score of 66-87 but there were still some good performances from the Panthers. Guard Grace Hunter led the team with 11 points alongside Raquel Ferrer-Bernad who had 10 points.

Other contributions include Hayes with a game high of five assists, Ekpiteta with six rebounds and guard Zaida Gonzalez with three steals.

FIU now holds an overall record of 9-7 with their record in conference play being 1-4.