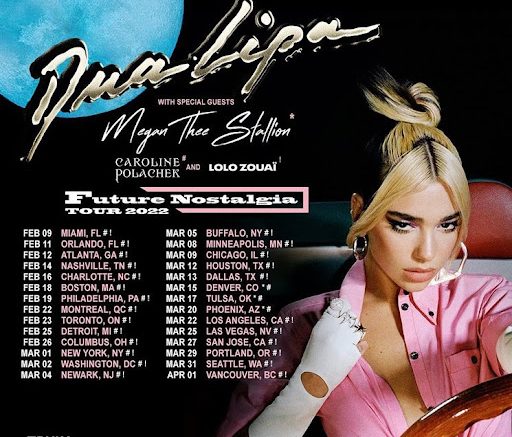 PantherNOW rounded up the most anticipated concerts of February through South Florida. Plenty of musicians are coming back from the peak of the pandemic by going on tour and releasing their new music. If you’re in the mood to hear some new music, it’s a great time to pick up some tickets and check out the musical acts we compiled in this month’s concert calendar.

Matute is a Mexican pop group that performs covers of both english and spanish songs from mostly the 80s. Their latest release is “Navidad Matute” for the 2020 Holiday Season. Their Matute Planeta Retro Tour is on Friday, Feb. 4 at The Fillmore Miami Beach at Jackie Gleason Theatre.

Circa Survive is an American rock band from Philadelphia. The members of Circa Survive are veterans of the emo and punk scene, and their latest release was in 2018, with their album “The Amulet”. Circa Survive is playing with guests Soul Glo and Tigers Jaw on Sunday, Feb 6. at Revolution Live.

The Farruko: La 167 Tour is taking place on Friday, Feb. 11 at the FTX Arena. Farruko is a Puerto Rican singer and songwriter. His tour is named after his 2021 album, “La 167”. The album showcases 25 tracks with tracks featuring Dimelo Flow, Fresy Franklin, Lenier, and more.

On Saturday, Feb. 12, Rick Ross, Jeezy, Gucci Mane, and 2 Chains are performing their Legendz of the Streetz Tour at FLA Live Arena. The rappers have collaborated with each other on multiple occasions. Rick Ross’ latest album “Richer Than I Ever Been” came out in 2021.

The Marcus King Band is a southern rock and blues band from South Carolina. They’re performing at Revolution Live on Sunday, Feb. 20. The latest release from Marcus King is their collaboration with Ashland Craft on the 2021 song “Highway Like Me”. They released the album “El Dorado” in 2020, featuring 12 songs.

Aminé is an American singer, songwriter, and rapper. He’s playing at Revolution Live on Tuesday, Feb. 22 in the Aminé- The Best Tour Ever Tour. He was part of the XXL Freshman Class of 2017, and went on to release multiple projects, the latest being his album “TWOPOINTFIVE” released in 2021.

The Eagles is a rock band formed in the 70s. The Los Angeles band is playing at the FLA Live Arena on Friday, Feb. 25. The Eagles: Hotel California Tour is going to feature some of their greatest hits over the decades.

On Saturday, Feb. 26 Badfish is coming to Revolution Live for the Tribute to Sublime 20 Year Anniversary Tour. The band is based in Rhode Island, and named after one of the songs on the album “40oz” by Sublime.

On Sunday, Feb. 27 at FLA Live Arena. MercyMe is going on their Inhale (Exhale) Tour, playing some of the Christian band’s most famous hits. They’re based in Oklahoma, and their latest album release was in 2021, “inhale (exhale)”.

Tickets for these concerts are available online and range in price. Whether you’re seeing a musician you love or you’re going to discover something new, there’s plenty of options for musical acts this month.