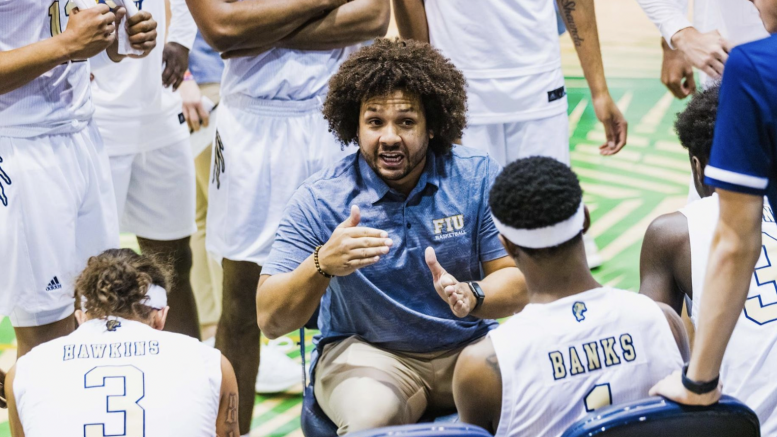 Coach Ballard talks to his team in a huddle. Photo by FIU Athletics

FIU took a trip to the Lone Star State this past week, losing both games against the Texas-San Antonio Roadrunners and Texas-El Paso Miners. The Panthers now fall to a 12-9 overall record and a 2-6 conference record including an 0-8 record on the road.

FIU struggled in the start of the game, trailing UTSA by six points for the first 10 minutes, with the Roadrunners biggest lead being by 14.

Even with UTSA missing their shots and giving FIU time to catch up, the Panthers still struggled. FIU finally narrowed the lead and started hitting their shots near the end of the first half. Despite this, the Roadrunners held the lead with eight points going into the half..

Coming out of the locker room, the second half showed a more dominant Panther offense. FIU scored the first seven points to bring the Roadrunners lead down to one. From here on out, the game was close and intense between the two conference rivals.

At the five minute mark, FIU guard Tevin Brewer made a layup to take control of the game 61-59. After Brewers shot, UTSA came back and scored 12 straight, to make their lead 71-63.

The Panthers could not come back in such a short time and lost 71-63 against the UTSA Roadrunners.

Both FIU and UTSA shot less than 35% from the arch, and less than 50% from the floor. The Panthers main trouble during the game was UTSA’s center, Jacob Germany. Germany went 10 of 18 from the floor with 25 points and 11 rebounds.

On the FIU side of the ball, center Seth Pinkney recorded six rebounds and four points, Brewer shot eight of fifteen with 17 points, and freshman guard Petar Krivocapic went four of five from the three-point line with 12 points.

FIU’s next game was two days later against the red hot UTEP Miners. The Miners, just two days prior, played the FAU Owls and came out with a narrow 60-58 victory. Going into the game, FIU played strong with one goal in mind, to win.

The Panthers performed fairly well in the first half, with a strong defense and shots falling from the floor. FIU went into the locker room with high hopes, and with a two point 38-36 lead against the Miners.

Despite having a convincing first half showing, the Panthers struggled to keep the momentum going. Costly turnovers and open shot opportunities for the opposing team ultimately cost FIU the game.

A key player to UTEP’s success was guard Souley Boum, who shot 68% from the floor with 32 points. Boum recorded a career high against the Panthers, with a lot of those points falling in the second half.

Turnovers were another costly mistake for FIU as they recorded 17 turnovers to UTEP’s nine. Moving forward, FIU has to play more aggressively, keep the ball in motion, and find a way to lock down key players on the opposing team, such as Jacob Germany (UTSA) and Souley Boum (UTEP) who were major factors for their respective teams this past trip.

After this short Texas road trip, FIU is now 5th in the C-USA Eastern Division with a conference record of 2-6. The Panthers come back home on Thursday, February 3, to play the Southern Miss Golden Eagles. They’ll stay at home to play the Louisiana Tech Bulldogs on Saturday, February 5.