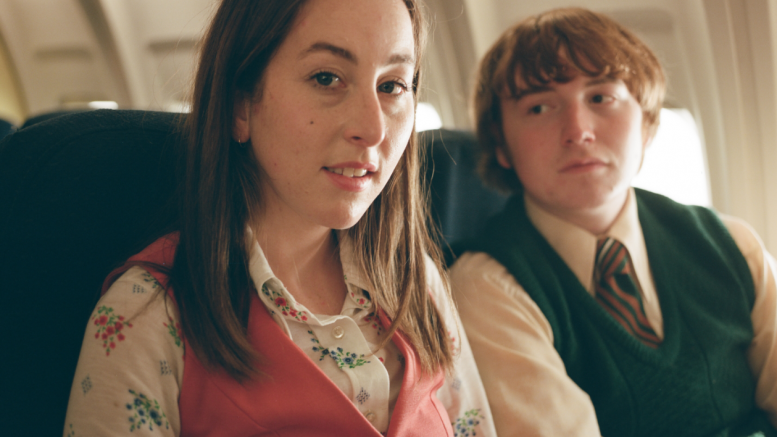 Over a month after its release, lead actress Alana Haim did a roundtable event with university student journalists from all over the country via Zoom.

The film takes place in California’s San Fernando Valley in 1973 and tells the story of Alana Kane (Haim) and Gary Valentine (Cooper Hoffman), how the two fall in love and how their relationship evolves over their adventure.

“Honestly, how many people do you meet on a daily basis and you don’t know who’s going to stick, come back in your life and say,” said Haim. “I think that’s exactly what happens in Licorice Pizza. These two people meet and they don’t know it yet but their lives are forever changed.”

From listening to music from the 70s to doing her own hair and makeup at 5 a.m, Haim shares what it took to get ready for this film.

“We basically lived in the 70s all the time. We never had any sort of technology on set, no one had phones or anything like that. It was very much like we were living during that time,” she said.

One of the most recognizable scenes in the film is when Haim drives through the streets of San Fernando in a U-Haul truck.

“Having to drive Cooper [Hoffman] and Bradly Cooper around Tarzana in a 70s UHAUL was insane,” said Haim.

Learning to drive a stick shift was one of the most challenging tasks for Haim. During one of the lessons, she shares how she had to drive up on a hill when she felt nowhere near ready.

“It was fully Princess Diaries when she’s on the hill and goes backward, that was what happened to me… I started to scream and I let go of the wheel,” said Haim.

While Licorice Pizza is Haim’s acting debut she has been in the entertainment industry since she was a toddler.

“I started in a band with her parents and my siblings when I was 4. Haim started when I was 16.”

The band Haim includes the sisters Alana, Este, and Danielle Haim. The grammy-nominated musicians have collaborated with Taylor Swift in the past.

Her parents and siblings shared the screen with her as well working alongside her for about a week, said Haim.

“We all had never acted before, it really was like the thing of, I just gotta dive into this deep end and immerse myself throughout this process and try to do my best.”

Director Paul Thomas Anderson worked with Alana and her siblings on music videos prior to Licorice Pizza, including Valentine, Summer Girl, and Right Now.

“Paul was very patient with me and was my cheerleader throughout the whole thing, I couldn’t have done it with him. But I did feel that I had a cheat sheet working with him on music videos,” said Haim.

The 2021 movie was filmed with 35mm film, similar to when working on Haim’s music videos.

“I love the process of watching his team load the films… it’s such a beautiful process when you go to see dailies and see the raw film being projected. It already looks like a movie,” said Haim.

When asked about how it felt to work alongside her family, Haim shares that due to COVID-19 regulations during filming, Haim’s family could not constantly visit the set.

“I don’t know how to work with anybody else,” said Haim. “I was like alone for the first time of my life, which was super crazy. For the first time, I feel older because I had to do this all by myself basically.”

While Alana Haim will soon start touring with her sisters in Haim, she hopes to act again but if it doesn’t “if this is it, this is the best experience I could ever dream of,” she said.