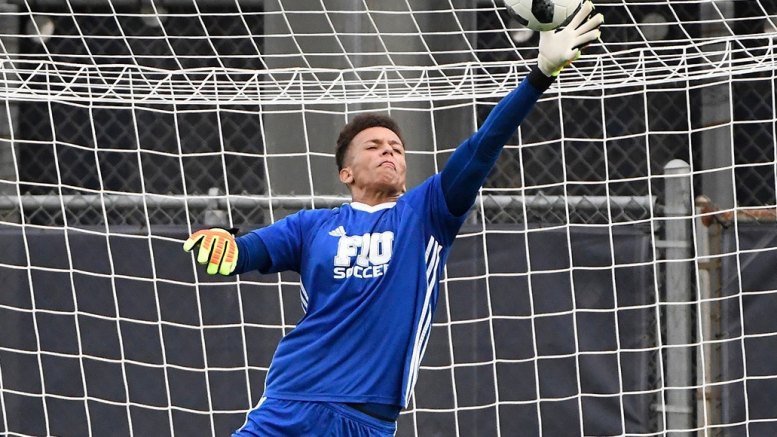 Tyler Hogan making a save during a training session his freshman season. Photo by FIU Athletics

Before he was one of Conference USA’s top keepers and a star in between the sticks for the FIU Men’s Soccer team, Tyler Hogan overcame injury and worked his way up the depth chart to become one of the Panthers most important figures.

The senior from Port Saint Lucie, Florida, took over the starting position halfway through the season and posted an impressive tally of four clean sheets, three of them coming in his first three starts.

Starting in 11 games in the 2021 season, Hogan’s performances earned him all-conference third team recognition, something that he wasn’t expecting but took great pride in receiving.

“I didn’t really expect it because I only started half the season, so definitely I’m proud of it,” said Hogan in an exclusive interview with PantherNOW. “At the same time I think it’s a testament to the team because I’ve got defenders in front of me who also have been recognized as all-conference as well.”

Hogan attended high school at Lincoln Park Academy in Port Saint Lucie, Florida before spending a year in Atlanta to play for Major League Soccer’s Atlanta United academy team from 2016-17. After his year in Georgia, Hogan returned home and played with Lincoln Park once again and played club soccer with the Davie Sharks.

Playing with the Sharks allowed Hogan to market himself to college coaches and scouts. When he would play in showcases, he would email scores of coaches to get their attention and have them attend matches.

The showcases would prove to be instrumental in the recruiting process, as Hogan received interest from a number of schools around the country. Ultimately it was one school that he hadn’t been in contact with that came calling with an opportunity he couldn’t refuse.

That school was FIU.

“I was emailing coaches every week that I was going to be in this tournament and eventually, FIU came around,” Hogan said. “I actually hadn’t reached out to them but they saw me at a national league showcase in Disney at the Wide World of Sports, and that’s where they first identified me.”

Joining the Panthers in 2018, Hogan’s time in the blue and gold has been filled with ups and downs, including a knee injury that kept him on the sidelines for a significant period of time. His freshman season was spent training before the injury shut his season down.

From the end of 2019 to the summer of 2021, Hogan went through surgery, rehab and like everyone else he dealt with the changed world caused by COVID-19.

“I kind of knew that year was going to be a grind, but I didn’t know how much yet, because we obviously didn’t know about COVID and no one kind of prepared for that,” Hogan said. “But once we were all forced to go home, I really kicked it into gear and said I’m either going to go up or down from here.”

Hogan spent much of his time at home during COVID continuing to work on his rehab and work on his positional skills when he could at local fields. He would develop a relentless work ethic that acted as a catalyst for his success in his breakthrough season.

Returning to campus in 2021 and adapting to life under new head coach Kyle Russell, Hogan took his final steps in his rehab process in the spring and summer before returning to the pitch. On September 21st Hogan finally got his long awaited first college start against the Jacksonville Dolphins.

“That was a lot of emotions and some nerves for sure, but also just like a sense of relief to finally be out on the field after working so hard for it,” said Hogan. “That moment was definitely just a sense of relief and accomplishment to finally have done it, because it had been my goal for so long.”

Hogan kept the starting job for the remainder of the season and with his successes between the sticks this season, he’s one step closer to achieving his dream of playing professionally. Hogan also started for the Panthers in both the C-USA tournament and the NCAA tournament games.

“I definitely do want to play professionally, that’s the number one goal for sure,” Hogan said. “A few of the former players that are playing pro now I’m still close with. You know they did what I wanted to do so I look at them and then try to replicate that but at the same time, I want to be different in my own right but still end up at the same place.”