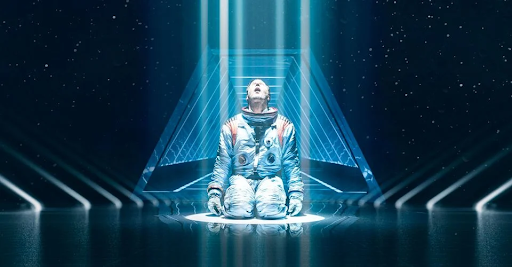 The first scene of “Moonfall” is a good microcosm of what the rest of the movie is going to be. The protagonists share a couple of meaningless jokes (and some exposition supposed to pass as characterization), and then a frenetic, sudden action sequence begins. The audience gets brief entertainment, and then on to the next thing (usually an identical scene).

As with any other Roland Emmerich film, this one is filled with stereotypes, cliche dialogue, and an uninspired, senseless plot, stitched together as an excuse to stun the viewer with a torrent of visual effects.

“Moonfall” follows disgraced astronaut Brian Harper (Patrick Wilson), who suffered the attack of a strange entity from the moon during a space mission. After contradicting the government’s cover-up for the incident, he spends ten years sunk in debt and alcoholism until the entity attacks again. This time, its victims are an expedition investigating a change in the moon’s trajectory. After learning through Houseman (John Bradley), a conspiracy theorist and megastructurist wannabe, that the moon is set to collision with Earth, he is recruited by his former partner, now NASA director, Jo Fowler (Halle Berry) to get to the moon and stop the threat before is too late.

Something to admire about this film is the sheer, incoherent madness of some of their overly post-produced action sequences, which happen at such a quick pace that the viewer can barely question or remember the development of the story.

At one moment, the protagonists are escaping from a tsunami; next, they are boarding an old NASA spaceship to reach the moon while that same tsunami (now turned into a literal electromagnetic wave) is about to hit them. Then, pieces of the moon start falling into the Earth while a mad AI pursues them into space.

The movie has a sense of urgency and a very efficient pace. This is particularly true of the last third of the film, which simultaneously handles many of these action pieces in space and Earth.

At times, the visual spectacle, which can be stunning, is more than enough to compensate for the lack of a proper story and characters. However, the lack of the aforementioned makes the real thrills scarce. Viewers that do not enjoy the disaster genre will be left, at best, unimpressed by the painfully cheesy and cliche exchanges that are supposed to make characters sympathetic.

Emmerich is a self-recognized popcorn movie director, his greatest ambition is to entertain audiences, and to a fair extent, he succeeds in this aspect. His true passion is to evoke what, for him, are sublime images composed almost totally of special effects.

Although not always convincing, some of the extended destruction shots are quite polished (and some have product placement that would make Michael Bay blush).

At $146 million, “Moonfall” is one of the most expensive independently produced films of all time (just like Emmerich’s last film, “Midway”). As stated by the director, it was completed as a passion project. The result is a weird one, a B-movie with an exorbitant budget and recognizable movie stars.

Unlike the recent movie, “Don’t Look Up,” there is no deceitfulness in this film, no attempt to be taken seriously by disguising itself as something intellectual or as a product with the pretension of a complex message. It is unapologetically dumb, excessive, and entertaining.

Although far from the best film in Emmerich’s filmography (that dubious honor would probably go to “2012” or “Independence Day”), “Moonfall” delivers in its promise of a fun, satisfactory, and unintentionally hilarious ride.