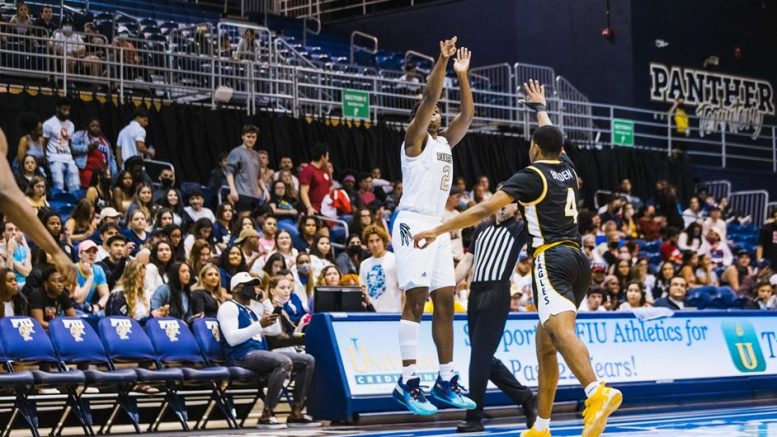 FIU G Denver Jones had a career night against Southern Mississippi as he had 23 points, while 8-8 from the field goal range. Photo by FIU Athletics

After losing two games on the road last week, FIU returned back home to the Ocean Bank Convocation for a weekend series against the Southern Mississippi Golden Eagles and the Louisiana Tech Bulldogs.

The Panthers went ahead with their matchup against Southern Mississippi winning by a score of 77-67, which saw the Golden Eagles have control early in the second half, but FIU made the comeback to win.

Little by little FIU was taking control of the game and knew how to maintain the differences until the end of the buzzer. FIU guards Tevin Brewer,  Eric Lovett, and above all  Denver Jones were key contributors in the win.

Brewer had a double-double with 13 points and 10 assists. Jones scored a total of 23 points and finished a perfect 8-of-8 from the floor.  Lovett also was in double-figures in scoring with 14 points Jaron Pierre Jr.was Southern Mississippi’s best player in the game registering a total of 21 points together with Tyler Stevenson.

The bench played an important role too in this victory as they scored a total of 30 points that contributed to the overall 50.0% on field goals.

The victory improves the home record 10-1 with an overall record of 13-9 and is reflected in FIU’s 5th consecutive victory on home floor at the Ocean Bank Convocation Center.

On Saturday, Jeremy Ballard´s team lost their second game at home, losing to the Louisiana Tech Bulldogs by a score of 86-82. The game started with a strong and solid defense by the visitors, a tendency that was actually carried out by both teams throughout the whole first period.

The game went on to half time with a 25-30 on the scoresheet, which reflected the tied performance by both teams. The night did not seem placid for Louisiana Tech, but as minutes passed on the second half, the result started to be much more favorable to the visitors. But Ballard’s team ran and dominated under hoops for the last minutes and left the scoresheet 80-79 with 45 ticks left on the clock.

The solid defense from the Bulldogs translated into the second loss at home in a game that ended 82-86.

Lofton and Amorie Archibald were the leaders of a solid Louisiana Tech. These two were both responsible for 21 points each, but the reality was far beyond the numbers. They both exhibited a very great superiority over the rest. The fast break points by the visitors (14) was the biggest difference in FIU loss.

For the Panthers, Lovett had a career game with 25 points, and 7-of-9 from the three-point line and Jones continued his scoring abilities off the bench with 17 points.

The Panthers fall to 13-10 and will close out their current three-game home stand on Monday, Feb. 7 vs. Charlotte at 5 p.m. ET at the Ocean Bank Convocation Center.  The game will be televised on Conference USA TV.