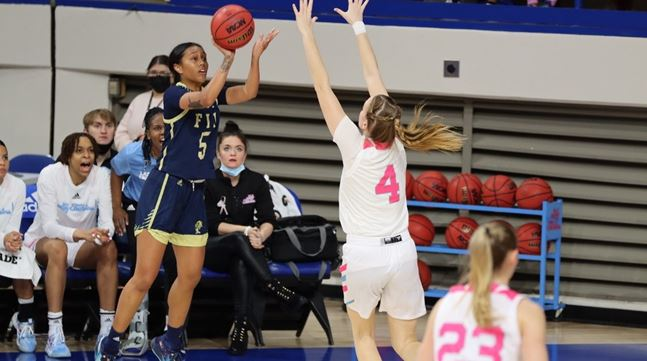 The FIU Women’s Basketball team lost two games of a three-game road trip this past week against Southern Mississippi and Louisiana Tech, but rebounded at home against Marshall.

The Panthers took on the Southern Miss Golden Eagles on February 3. The game started neck and neck with both teams trading baskets until the end of the first quarter when the Golden Eagles managed to get a six-point advantage (11-17) heading into the second quarter.

FIU clawed their way back into the game and had a six-point lead of their own (31-25) with 4:26 on the clock. Foul trouble gave the Golden Eagles a chance to regain their advantage before time expired. The score going into halftime was 31-34.

In the third quarter the high-paced scoring continued from both teams. The Golden Eagles gained another six-point lead before the Panthers came fighting back to get the lead back with 1:02 to go in the third quarter. The Panthers went into the fourth quarter of play with a score of 53-49.

The final quarter of play had the lead change three times as the game was defined by the last Golden Eagle offensive possession. A last-second jumper gave the Southern Miss the win over the Panthers with a final score of 65-64.

On Saturday, the Panthers played the Louisiana Tech Lady Techsters, who held an 8-1 record at home heading into the game.

FIU was the first to break the deadlock and score, giving them the only lead they would have for the whole game.

The Lady Techsters gained momentum and secured the advantage heading into the second quarter. It was much like the first quarter and the Panthers ended the first half down by 13.

FIU’s offense struggled to get back into the game. Along with turnovers and foul trouble, the Panthers kept getting scored on. The Lady Techsters went into the final quarter with a 25-point advantage. The Panthers couldn’t find a way to turn the game around and would ultimately lose 62-81.

Nelson led the team in points with 17 and tallied eight rebounds along with Forward Emerald Ekpiteta. Hunter came off the bench and recorded 13 points.

FIU regrouped back in Miami when they faced off against Marshall the following Thursday. This time around, not only did the Panthers shine on the defensive end but were also hot from the field.

In the first quarter, the Panthers opened up with a 7-0 run. Forward Ariel Colon set the tone as she went 5-5 in the opening quarter with 12 points, closing out the period with the Panthers up 22-12.

Despite these performances from FIU, Marshall was able to claw their way back next quarter to make the game competitive again, cutting FIU’s lead down to only five points.

Going into the second half of play with a lead of 39-34, the Panthers struggled to maintain their lead throughout the third quarter giving way to two lead changes and eventually going down 54-53 with 57 seconds in the period remaining.

With that time, Colon was able to score an unanswered five points alongside a transition three ball that gave FIU a 58-54 lead heading into the last 10 minutes of play.

The Panthers were relentless in the last quarter by not giving up another lead. Marshall only got close one last time with 59 seconds remaining when they came up two points behind the Panthers, trailing 63-65.

That proved to be their last effort though as Ekpiteta scored an and-1 play that put the team up by five points once again. Colon then closed out the show by blocking Marshall’s last three point attempt, sealing the win for the Panthers.

There were a lot of notable performances coming out of the game, especially from Colon who scored 31 points on 87.5% shooting. Ekpiteta also had a night, snagging a game-high nine rebounds alongside her 12 points.

Another highlight came from Nelson as she recorded her 200th three pointer for FIU.

Honorable mentions go to Hayes who scored 12 points and dished out a game-high five assists, and Hunte4 who scored 10 points.

The Panther’s overall record now stands at 12-10 with their conference record being 4-7.

FIU will be back to play next week away from home this time, where they’ll face off against the Middle Tennessee Blue Raiders on Feb. 17 at 7p.m. and the Rice Owls Feb. 19 at 3p.m.