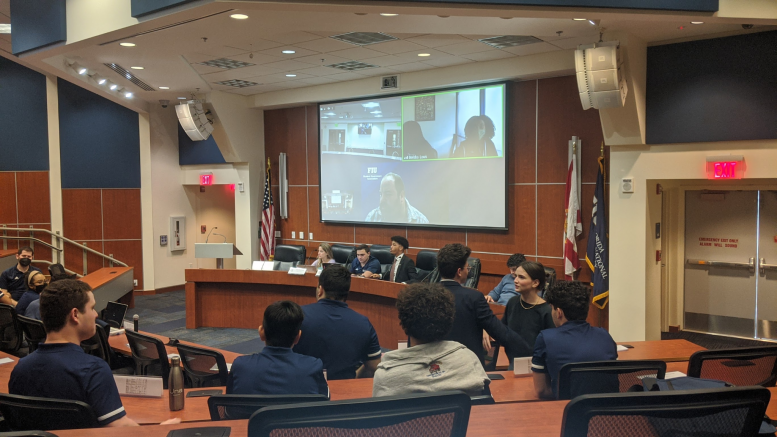 Monzon is studying public policy services as a junior at FIU’s Honors College. She volunteered with SGA as a legislative aide for about two years and as a fellow with the United Nations Millennium and a member of the Maurice Ferré Institute for Civic Leadership.

“I’m ready to learn as much as possible from our new chief justice and hit the ground running,” said Monzon. “I’m just really passionate about advancing equity and justice through unbiased policy analysis.”

Gonzalez is a junior studying computer science with a minor in business at the Honors College. Although she doesn’t have the same legal background as other candidates, she believes her experience interning with Facebook is an asset in terms of research.

Hajiyev, a freshman studying biology, was appointed as staff secretary of environmental resilience and green initiatives. He hopes to reduce litter at BBC.

“We talk about climate change and ocean acidification,” said Hajiyev, “But to really get to those big topics, I think it’s really important to…at least get those little things done.”

Rilo, a senior majoring in hospitality management, was appointed staff secretary of Social Justice and Advocacy. She would like to increase diversity on campus and promote social justice.

“We have to have diversity in everything,” said Rilo.

This week, Tiara Campbell and Kaitlyn Coll were confirmed as College of Arts, Sciences and Education (CASE) senators.

Campbell is a sophomore majoring in biological sciences on a pre-med track in the Honors College and a member of the Phi Delta Epsilon medical fraternity. She hopes to increase student engagement through CASE lectures and senator office hours.

Coll is also a sophomore majoring in biological sciences on a pre-med track in the Honors College. She founded the Shakespeare Society at FIU.

As a senator, Coll wants to implement cross-topic CASE lectures. She’d also like to use her position to change some of the grading rules within CASE, particularly one limiting the number of students who can get an A in a class.

Scott Carr and Mike MacIntyre, FIU’s new sports director and football coach, visited the senate this week. They announced a spring football game on Apr. 9 where students will be able to take to the field to kick off and call plays.

Carr and MacIntyre discussed how to improve engagement with athletics.

“We want [athletics] to be an experience,” said MacIntyre. “We want the students involved in every way they can…we’re going to try to do other events to make it more special for the students.”

The executive board also announced the development of forms on Panther Connect that would allow students to submit ideas for new legislation. The forms are currently under review by School of International & Public Affairs (SIPA) Senator David Luis.