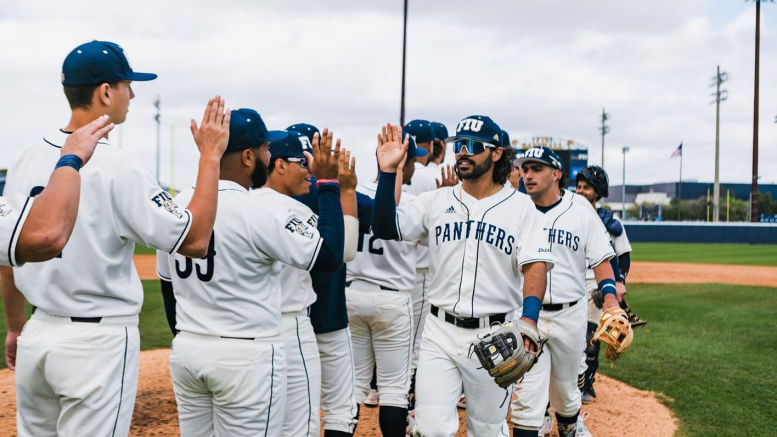 FIU Baseball team got a four-game sweep on opening weekend as they took down the St. Thomas of Minnesota Tommies. Photo by FIU Athletics

It was a weekend full of good spirits for the FIU Baseball team as they took all four games against the St. Thomas (MN) Tommies on opening weekend and then got a midweek victory over the Bethune-Cookman Wildcats.

The Panthers are now 5-0 on the season, tied for the best record in all of Conference-USA.

In game one of the series on Friday, FIU took the early 2-0 lead in the bottom of the first, courtesy of infielder Noel Perez, a transfer from Indian Hills Community College.

The Panthers starting pitcher Patrick Pridgen was sharp through the first four innings, striking out seven batters. However, in the top of the fifth inning, after errors from the infield and walks from Pridgen, the Tommies took advantage by scoring three runs to take the 3-2 lead.

Into the top of the seventh, with the game stalled at 3-2, a one-hour rain delay ensued. After the resumption of the game, the FIU offense came back as Panthers outfielder Alec Sanchez tied up the game with a solo home run.

The game was tied at three until the bottom of the ninth, as infielder Steven Ondina got on base with a single and eventually advanced to third on an error. Sanchez delivered once again with a walk-off hit to win the game 4-3. Sanchez finished the game going 4-5 with a triple, home run, and two singles.

In game two of the series, St. Thomas took the 1-0 in the top of the second as they brought home a runner from a wild pitch. FIU responded back in the bottom of the third with a three-run inning in which Sanchez tied the game with an RBI single and catcher Matthew Gonzalez gave the Panthers the lead with a two-run double.

The game stayed 3-1, which was the final score as FIU pitchers Jack Clemente and Carlos Lequerica looked dominant allowing no runs and only three hits combined in the final three innings of the game to take game two.

Game three of the series started 45 minutes after game one, as the starting pitching was strong early on. Panthers pitcher Kevin Martin went four innings, allowing one run and four strikeouts, while St. Thomas pitcher Walker Retz had the same pitching line.

The Tommies took the 1-0 lead in the top of the first on a RBI single, however FIU took no time to respond back as Panthers infielder Dante Girardi tied up the game at one in the bottom of the second.

With the game tied in the top of the fifth, lightning and rain was heavily present in Miami as the matchup was paused and resumed the next day.

On Sunday, game three officially resumed as the Panthers took the lead late in the bottom of the sixth from RBI singles courtesy of Girardi and Gonzalez, giving FIU a 3-1 lead.

In the top of the seventh, FIU got the 1-2-2 inning to take game three of the series.

The final game of the matchup of the Panthers and Tommies featured another offensive explosion. The scoring in the bottom of the first as Sanchez kicked off the game with an RBI double. In the second inning, the Panthers put up four runs in the inning with hits from outfielders Mario Zabala, Robert Sotolongo, and infielder Adrian Figueroa to make it 5-0.

Sanchez continued his stellar performance in the series as he hit a two-run homer in the bottom of the fourth extending the game to 7-1.

The Panthers tacked on two more runs in the fifth with RBIs from catcher Jayden Melendez and Sotolongo to make it an eight run lead, and eventually won the game 9-1.

FIU finished off the opening series going 4-0, which was the first time since 2014 that the Panthers opened a season sweeping a four-game series.

The Panthers then hit the road for a mid-week matchup taking on the Bethune-Cookman Wildcats in Daytona Beach.

FIU got on the board first with an RBI groundout from Figueroa, however the Wildcats took the lead scoring four runs in the bottom of the second to go up 4-1.

Down four, the Panthers did not hesitate as they tack on a run in the top of the third from a sacrifice fly from Girardi, scoring Sanchez, making it 4-2. Then, in the top of the fourth, they tied up the ballgame on a two-run home run by Sotolongo.

The offense continued into the top of the sixth as FIU put up five runs, which included a Ondina two-run inside the park home run, and a Figueroa RBI single, giving the Panthers a 9-4 win.

FIU will head back to Miami for four games in three days as they take on the Michigan Wolverines and Seton Hall Pirates from Friday, February 25 to Sunday, February 27.