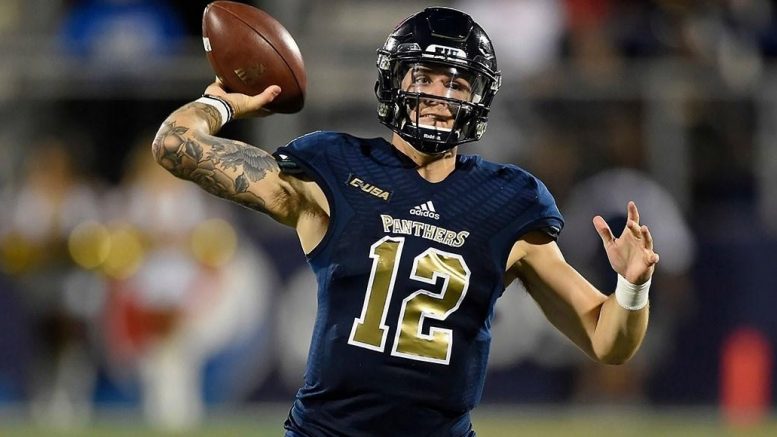 As the United States Football League begins to prepare for its inaugural season in a couple months, it recently held a player-draft for all eight teams.

Former Panther QB Alex McGough was drafted with the sixth pick in the first round by the Birmingham Stallions on Tuesday, Feb. 22 in Birmingham, Alabama.

In 2017, McGough helped the Panthers finish with an 8-4 record, qualifying them for their first bowl game since 2011. McGough had to leave the first quarter of the Gasparilla Bowl against the Temple Owls with a fractured collarbone. The Panthers would go on to lose 28-3 without their starting QB.

The Seattle Seahawks drafted McGough in the seventh round in the 2018 draft, making him the Seahawks’ first QB draft pick since Russell Wilson in 2012. He was also the eighth Panther and first QB in FIU history to be selected in the NFL Draft.

McGough never saw much playing time as he was often relegated to the practice squad. He was waived by the Seahawks on May 15, 2018, and has since bounced from team to team, having brief stints with the Jacksonville Jaguars and Houston Texans. He was a free agent before entering the USFL Draft.

USFL, or the United States Football League, is a planned professional football league with eight teams split into two divisions. The league is set to play their first inaugural games on April 16, 2022 with the season lasting for 12 weeks.

The Stallions came into the draft looking for someone to lead their offense and found McGough, a skilled passer with an affinity for finding the open man. Being under the tutelage of a veteran quarterback like Russell Wilson could give McGough an edge over his competitors and will hopefully translate to great performances during games.

But McGough wasn’t the last Panther to be drafted to the USFL. Joining him was WR Maurice Alexander and CB Ike Brown.

Alexander, 5’11, 180 lbs, was drafted by the Philadelphia Stars with the eighth pick in the seventeenth round. He spent all four years at FIU, switching his position from QB to WR after his first season.

Alexander was actually the one who filled in at QB for McGough after he was injured in the Gasparilla Bowl. In his senior season, Alexander hauled in 25 catches and one touchdown while recording nearly 300 yards. He posted his best receiving game against Middle Tennessee, catching five passes for 87 yards and a touchdown.

With the ninth pick in the eleventh round, the New Orleans Breakers selected Brown, 6’1, 185lbs, to play at cornerback.

Brown recorded 101 tackles, 29 pass breakups and five interceptions in his FIU career. In his senior year, he started in 12 games and recorded 44 tackles while achieving a career-high nine tackles against Louisiana Tech on Sept. 20, 2019.

After his career at FIU, Brown was signed by the Buffalo Bills as an undrafted rookie in 2020. His career with the team was brief, as he retired soon after. According to a statement Brown made on his Twitter, he fell out of love with football. His decision to join the Breakers seems to signify that his passion for the game has been rekindled and he’ll be looking to make a major comeback.

McGough, Alexander and Brown will all get their first taste of action in April as the USFL season begins on April 16, in which the Birmingham Stallions will face off against the New Jersey Generals at 7:30pm.