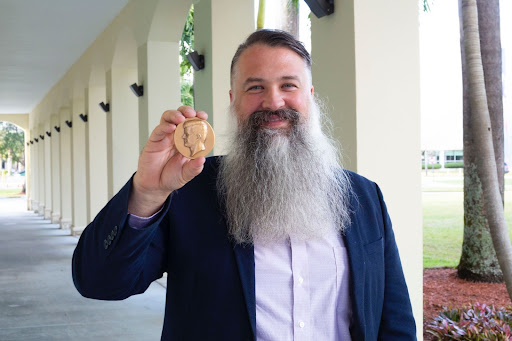 FIU Associate Professor Tony Galaska was recognized for his contributions to the theater community with a Gold Medallion, a distinguished award given by the Kennedy Center American College Theater Festival.

Founded in 1969, the Kennedy Center American College Theater Festival (KCACTF) is a national theater program of college and university students which, among many things, guides students in refining their skills through regional festivals that culminate in one national festival in Washington D.C.

KCACTF awards the Gold Medallion to individuals who have made an impact on the teaching and production of theater, as well as dedicated a considerable amount of time, enthusiasm, and artistry to the growth of KCACTF.

Galaska is associate professor of lighting design and head of the design and production program at FIU. Additionally, he is the vice-chair of design, technology and management for KCACTF Region IV. He has been a part of the KCACTF Region IV festival for more than 10 years.

Though he is now a respected teacher with an award for his mentorship, he was once just a student too. Like many pupils, he cherished the guidance of his teachers and now values how those relationships molded him into the person he is today.

One mentor that stands out to him is a professor he had in Purdue University, where he attended for his M.F.A. for lightning design. “I never felt like he was the almighty teacher and I was the student. It was a mutual relationship,” he said.

That teacher-student bond excites Galaska in his own classroom, because his understanding of theater is the essence of the human connection that it stimulates. In its most basic form, theater is just the sharing of stories, and listening to them helps people connect.

“What I love about being at FIU is there are so many people, such interesting stories, and experiences that really formulate who they are not only as human beings but [also] the art that they’re creating, and the art that they’re gonna create after they’re done at FIU,” said Galaska.

Though a key member of the theater community on Panther territory, his leadership extends beyond the walls of FIU classrooms and stages. Galaska has also touched the lives of the students that participate in the festivals, as many of them reached out to congratulate him for the Gold Medallion.

That’s what the award means to him: connection. There is a feeling of community in the prize because it isn’t just about him, it’s about giving to his students and helping them grow in their artistry and personhood. It’s an effort bigger than himself.

He feels honored to be recognized by his colleagues for something that comes naturally to him. “It was not much for me to show kindness, share my experience, talk with [students], and celebrate their work, and it affected them a lot,” Galaska said.

He knows that he’s making a difference in his students’ lives. He hopes that they walk away with knowledge about craft and skill, but above all, he hopes they stay curious. He wants them to keep asking questions and finding new things to keep them engaged with not only theater, but with life.

“Curiosity is really important for us not only as lifelong learners, as people, but just to move the world around us. That we keep learning and keep exploring things,” said Galaska.

The thread of community and connection is present and strong in Galaska’s approach to theater education. With such principles at the heart of his work and passion, it is unsurprising that he was chosen to be a Gold Medallion recipient.