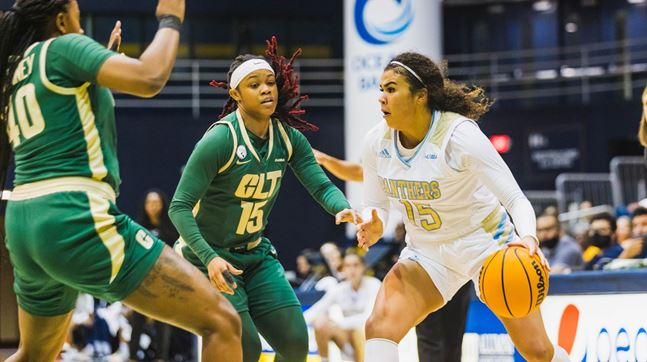 The FIU Women’s Basketball team dropped both games of a two-game homestand against the Charlotte 49ers and Old Dominion Monarchs this past weekend.

The Panthers went against the Charlotte 49ers on Thursday. The game started off quick with both teams trading buckets and neither team letting up. FIU managed to get a four-point lead with 4:12 on the clock but the 49ers fought back to shorten the gap and head into the second quarter with the score of 14-13.

There was a shift in the game after the whistle to start the second quarter as the Panther’s defense struggled to stop the 49ers from scoring. FIU found themselves down by nine points and held scoreless for almost five minutes. By the end of the quarter, they only scored nine points and headed into halftime down 23-29.

In the third quarter, the Panther’s defensive woes continued. With 5:37 to go in the quarter, the 49ers gained a 17 point lead over FIU, who shortened the deficit to 10 points (50-40) and headed into the final quarter of play.

Guard Grace Hunter’s effort off the bench was the highlight for the Panthers as Hunter scored 12 of her 23 points in the third quarter. FIU ended the fourth quarter the same way they ended the third, down by 10; the final score of the game was 55-65.

As mentioned, Hunter had 23 points which was the team-high for this game and her season-high in points. The Panthers bench outscored the 49ers, 31-9. Forward Kyla Nelson led the team with seven rebounds and forward Emerald Ekpiteta led the team in steals with a season high, four.

On Saturday, the Panthers faced off against Old Dominion who gave FIU the same trouble they experienced against Charlotte.

The Monarchs established their lead early into the game, gaining as much as a seven point lead with 4 minutes left of play. The Panthers didn’t stray behind as they would find ways to claw back in an action-filled first quarter. The first quarter ended with FIU down by four and a score of 13-17.

The Panthers were, again, outscored in the second quarter. FIU struggled with fouls on the defensive end and turnovers and misses on the offensive end as the Monarchs capitalized on their possessions. The blue & gold went into the half losing by 17 points (46-29).

The third quarter of play was much like the second; the Monarchs would score on most of their possessions as the Panthers struggled to find a groove on each end of the court. FIU would end the third down by 15 (48-63).

At the end of the game, the Panthers managed to lessen the blow by cutting the Monarch’s lead to 12 with the final score of 69-81.

The Panther’s bench would outscore the Monarchs, 38-8. Guard Tanajah Hayes had a season-high 25 of those 38 points coming off the bench. Nelson scored 21 points and recorded five rebounds.

The Panthers now have an overall 12-15 record with a 4-12 record in conference play.

FIU will be in action on the road where they’ll look to end their losing skid against the FAU Owls on Wednesday, March 2 at 6pm.