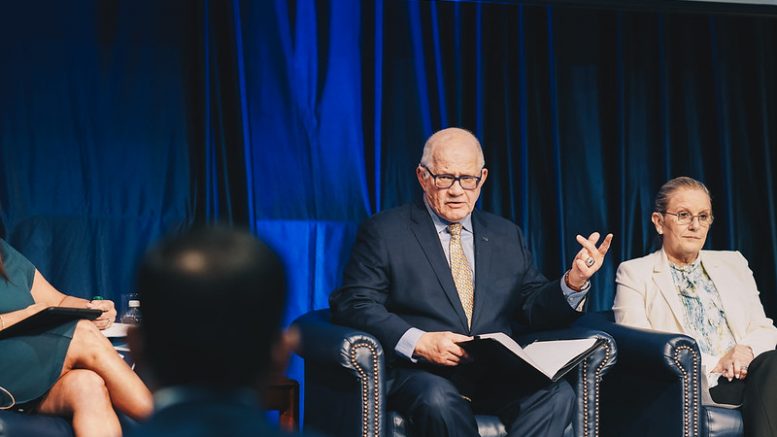 Rosenberg during a Fall 2021 Town Hall. Photo via FIU Flickr.

“Given his position as President of a major educational institution…and the obvious power dynamic that existed in the relationship, the President, at best, displayed extremely poor judgment,” reads the report.

News of the investigation surfaced following Rosenberg’s abrupt resignation on Jan. 21 after 13 years as President Both Rosenberg and the University initially cited his wife’s declining health as the primary reason for resignation.

However, Rosenberg released a memo two days later admitting he had caused “discomfort for a valued colleague,” and that this was the true cause of his departure.

The Isicoff Ragatz law firm, the firm that conducted the report, interviewed five individuals involved with the events–including Rosenberg, Rosenberg’s Chief of Staff Javier Marques, the female employee, the employee’s supervisor and Board of Trustees Chair Dean Colson.

Text messages, emails and other communication between Rosenberg and the female employee during this period were also reviewed as part of the investigation.

Though the emails portrayed a friendly, professional working relationship, text messages, on the other hand, revealed an “inappropriate level of familiarity and informality” from both Rosenberg and the employee, according to the investigator.

Both sent compliments to each other, often including hearts and other emojis. The employee also sent multiple photographs of herself outside of work, including pictures of herself working out.

An occasion exemplifying their relationship is displayed in a thread of text messages between the two after the female employee sent Rosenberg his flight information.

Rosenberg replied, “Omg. Thanks. Fortunately for me you are an amazing person!” to which the employee responded, “Amazing people find each other!!!”

PantherNOW’S Timeline of the investigation:

Following his resignation, the former president’s status is that of a tenured faculty member for the Steve J. Green School of International and Public Affairs.

Isicoff Ragatz will present the findings to the FIU Faculty Advisory Board, also known as the Human Resources team, who will review the report and give their recommended course of action.

From there–depending on the perceived severity of the misconduct–the recommendation will either be given to the department chair, dean or provost to enact the appropriate disciplinary action.

As of now, Rosenberg’s future with FIU remains unclear.