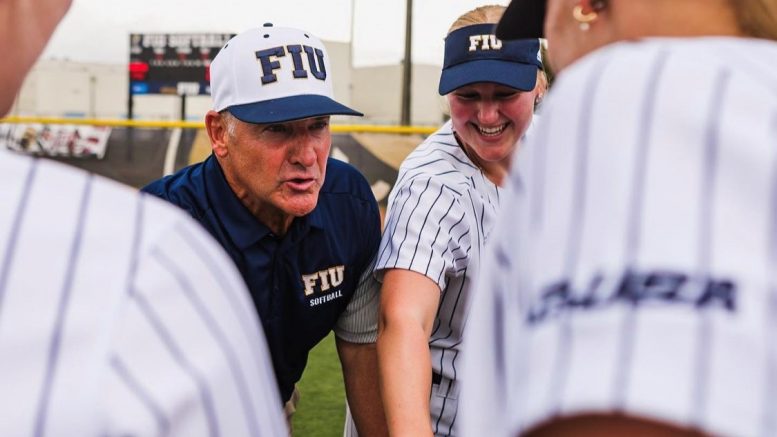 Coach Larabee giving words of encouragement to his team. Photo by FIU Athletics

The FIU Softball (14-10) team had a successful weekend during the Stetson Invitational, winning four out of five games in the weekend.

The Blue and Gold faced the Bethune-Cookman Wildcats in the first game of the weekend, taking victory from this game.

The first three innings were scoreless; however, outfielders Madison Lewis and Alexis Ross put the Panthers on the board first, making it 2-0 FIU.

The Wildcats quickly caught up with the score and tied the game in the bottom of the fourth.

Outfielder Brooke McCann scored FIU’s third run in the top of the fifth, making it a 3-2 game At the bottom of the fifth the game was once again tied.

At the top of the eighth, the Panthers managed to score three runs by a hit from third base Brianna Hill, Ross, and catcher Makayla Garcia, making the Panthers claim victory.

The game finished with a 6-3 for FIU.

During Friday’s nightcap, the Panthers defeated the Stetson Hatters by a score of 8-5..

The first three innings were scoreless until the Hatters scored three runs in the bottom of the third.

FIU responded by putting up eight runs in the top of the fourth inning alone. Infielder Gaby Ruiz got the inning started with a RBI single, while first baseman Kayla Whitehead, McCann, and Ross all added singles to extend their lead to five.

The Panthers had to face the Wildcats again on Saturday, winning the game 10-2.

Lewis gave the Panthers the 1-0 lead on a solo home run, however the Wildcats scored on top of the third, making the score 1-1.

For a second straight day, FIU had a long offensive inning, this time a seven-run third. It was highlighted by a Whitehead three-run home run and a Gallegos RBI single, making it 8-1.

The Wildcats scored their second run on top of the fourth. The game continued up until the bottom of the fifth in which the Panthers tacked on two more runs on a two-run double from catcher Makayla Garcia. The game concluded with a score of 10-2, another win for the Panthers.

During Saturday’s game against Stetson, the Panthers won by a score of 3-1

The Hatters scored their first run on the bottom of the first inning, and the game remained with a score 1-0 for the next few innings.

In the top of the sixth, FIU tied up the game on a sacrifice fly from Phillips. Later in the inning with Lewis up to bat, a error to the Hatters second baseman allowed utility player Amelia Varela and McCann to score, making it 3-1, and a FIU win.

It marked  a 10 game-winning streak for the Blue and Gold.

During Sunday’s game the Panthers faced the USC Spartans, in which game they lost the winning streak when they were defeated 11-2.

FIU took the early lead in the top of the third on a Whitehead two-run home run, making it 2-0.

The Panther’s overall record stands at 14-10

The Blue and Gold are scheduled to play against the University of Alabama’s Dragons to kickoff their Conference USA play from Friday, March 11th to March 13th. First pitch on Friday is set for 6 p.m.