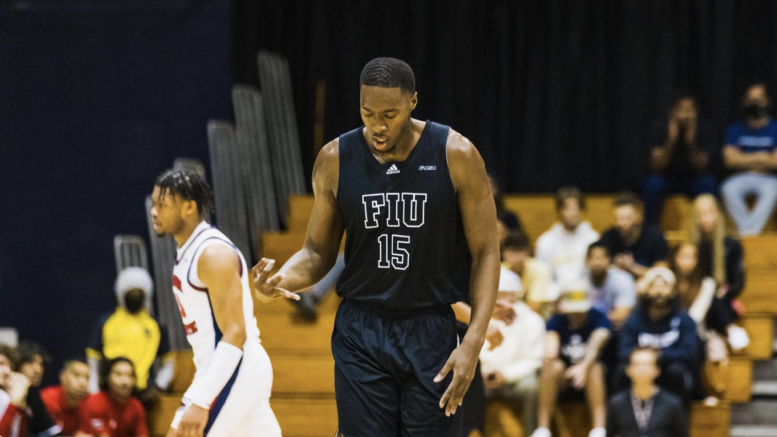 The FIU Men’s basketball team took on their rivals the Florida Atlantic Owls this past weekend, playing the first game at home and the second in Boca Raton.

FAU came into the weekend with an intimidating 8-7 record in C-USA conference play. The Panthers came into this matchup with a 5-10 conference record and riding a three game losing streak..

The Owls  took both games in their last meeting, and their energy from the previous season carried into this year. Without star guard Tevin Brewer, FIU struggled and was handed a 71-51 defeat in their final home game of the season.

With a packed crowd and an 11-4 home record, FIU had the momentum coming into this game, despite their two-game losing streak. On the other hand, FAU has dominated the teams FIU struggled against.

The first half was a rough one for the Panthers, as the Owls kept FIU scoreless for the first 7:53, as they took an early 10-0 lead. The Panthers’ defense stood their ground throughout the rest of the first half, forcing 12 forced turnovers. On the offensive side of the ball, forward Clevon Brown scored nine straight and brought FIU to a close 21-22 trail in a highly defensive, low-scoring game.

FAU took control early on in the second half, doubling their points in the first seven minutes, whereas FIU was only able to muster eight points. Leading by a 41-29 score, the Owls  kicked it up a notch in the midway mark of the second half and put the game to rest at 56-36 with under eight minutes left.

The rest of the game followed the same pace, with the Panthers  suffering a loss in their home finale by a score of 71-51.

For FIU, two players stood out in this game and tried to hold FAU at bay. Clevon Brown had a team-best 13 points, adding a pair of blocks to the stat line. Senior guard Eric Lovett scored 11 points and led the Panthers with six rebounds.

The second game between the two South Florida rivals took place in Boca Raton, at the FAU Arena. The Panthers’ 1-11 road record mixed with a packed Boca Raton house made this final season game extra difficult for FIU.

The first six minutes was a back and forth battle, however, FAU was the only one in the driver’s seat. The Panthers never led in this contest, and because of this trailed the Owls by 22 points with 3:53 left in the first half. The first half ended with the Panthers trailing by 21.

Despite the rough start, shots from guard Javaunte Hawkins and Clevon Brown put FIU back in the game.

Down by four points with 1:11 left on the clock, Brown makes a layup to cut the Panthers deficit to two. Unfortunately, FAU would go on to score six straight from the charity line to seal the win.

Despite their loss, the Panthers had a strong second half, outsourcing the Owls 47-34, with Hawkins tallying a team-high 21 points, shooting five of eight from the arc. Brown tied a season-high 20 points and added eight rebounds to the stat sheet.

The FIU men’s basketball team closed out their 2021-2022 season with a 15-16 regular-season record and a 5-13 record in Conference USA action. The Panthers championship run isn’t over, however, as they play 7th seed Marshall in the C-USA Tournament on Tuesday, March 8.