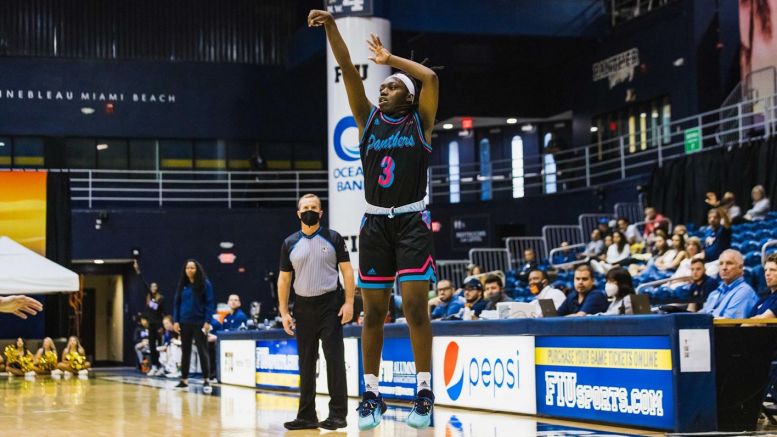 The FIU Women’s Basketball team returned to their winning ways before the end of the regular season taking down the Florida Atlantic Owls in a doubleheader this past Wednesday and Saturday.

The Panthers traveled to Boca Raton on Wednesday to face the Owls in the first game of their doubleheader. The game started slowly with neither team managing to get into a scoring rhythm. Baskets were traded but rather sparsely as the first quarter score ended tied, 10-10.

The second quarter was a different story entirely. FIU began to make the best out of each possession, scoring on one end and making it tough for FAU to score on the other. Defense dominated as the Owls were held scoreless for nearly five minutes. The Panthers dominated in the paint scoring 18 of their 24 points in the second quarter and headed into the half with a 14-point lead with a score of 34-20.

In the third quarter, the Panthers continued to put pressure on the Owls on the offensive end. FIU shot 77 percent from the field with 21 points. With a 13-point lead, the third quarter ended 54-41.

The Blue and Gold continued their dominance, gaining as much as a 21-point lead in the fourth quarter and shot 75 percent from behind the arc. FIU’s relentless offense and countless unanswered scoring runs never gave the Owls a chance to answer back. The final score of the game was 72-56.

On Saturday, FIU was back at home to play against FAU in the final game of the regular season.

The first quarter started off hot with both teams making points back-to-back. But with five minutes left in the game, the Panthers gained the lead and started to build more momentum. The first quarter ended with FIU up six and the score was 22-16.

The Panthers seemed to have put their foot off the gas once the second quarter started. FAU began to close the gap while FIU struggled to find its footing again. When the whistle blew for the end of the first half, the lead had been cut down to four and momentum seemed to shift as the teams went into halftime with a score of 35-31.

The fourth quarter had the Panthers widening the margin even more; at one point, the lead was 18 points. The final score was 72-56.

The Panthers finish the season with a 14-15 record with a 6-12 record in conference play.

FIU will be competing in the Conference USA Tournament starting March 8. The Panthers will start their tournament run in a play-in round against the FAU Owls.