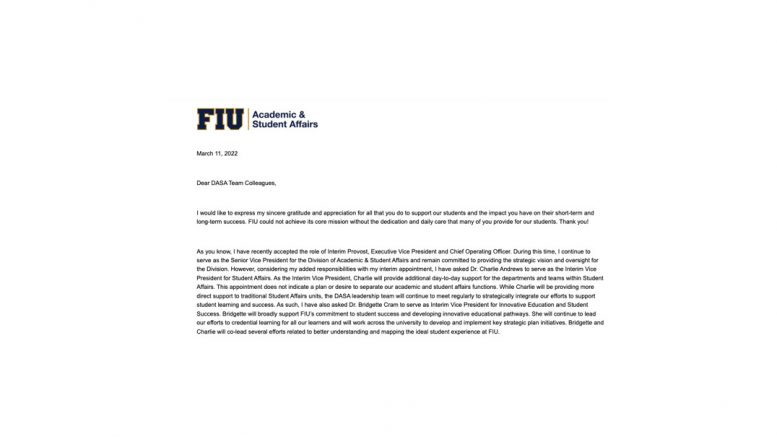 Screenshot of Division of Student and Academic Affairs announcement email.

Because of added responsibility, interim provost Elizabeth Bejar announced that Charlie Andrews would take over her old position and serve as interim vice president for student affairs.

Bridgette Cram will take over as interim vice president for innovative education and student success.

Andrews has worked at FIU for 20 years and is a two-time alumnus. He began working at FIU in 1999 and has since taken on several positions, with his most recent role as assistant vice president for academic and student affairs.

“As the Interim Vice President, Charlie will provide additional day-to-day support for the departments and teams within Student Affairs,” reads the email.

Cram worked at FIU for 10 years and was the assistant vice president for academic and student affairs. She has also worked as a liaison for FIU with networks like the Association of Public and Land-grant Universities, Excelencia in Education and the Florida Consortium of Metropolitan Research Universities.

In her time at FIU, she “created the Office of Micro-Credentials, developed a model for academic apprenticeships and served as Co-Principal Investigator on a $2 million Department of Labor grant.”

Since 2018, Bejar has served as FIU’s senior vice president for academic and student affairs.

Bejar became interim provost after Kenneth Furton stepped down from his provost position in January. Futon’s resignation took effect on Mar. 1 and Bejar became the first Hispanic woman to serve as Interim Provost for FIU.