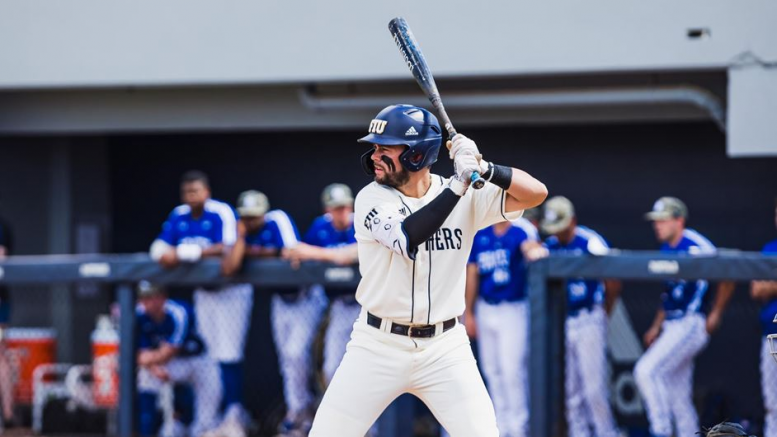 The FIU Baseball team extended their losing streak to nine games by getting swept against the Jacksonville Dolphins this past weekend in the midst of an 11-game homestand.

In game one, Panthers had their ace on the bump in pitcher Patrick Pridgen, who came in with a 0.00 ERA in three starts and 32 strikeouts, which was top 10 in the nation.

FIU got on the board first in the bottom of the third as outfielder Alec Sanchez hit a two-run home run to left field giving the Panthers a 2-0 lead.

The lead was not for long as the Dolphins responded back. After three hit-by pitches, and a walk in the top of the fourth inning, Jacksonville tacked on three runs from a two run double by Jackson Grabsky and a sacrifice fly by Jonah Diaz, establishing 3-2.

In the top of the fifth, Jacksonville got another run on the board as right fielder Blake DeLamielleur hit a solo home run to cover the scoreboard in left field, making it 4-2.

FIU would cut the deficit to one as outfielder Robert Sotolongo doubled down the left field line, scoring outfielder Dalton Hurst, shortening the lead to 4-3.

However, a critical double play by Jacksonville involving infielder Steven Ondina for FIU resulted in a 4-3 for the Jacksonville Dolphins to take game one.

The second game of the series saw the Dolphins jump out to an early 4-0 lead in the first two innings from a Jesus Pachedo RBI single, and scores on wild pitches from FIU starting pitcher Kevin Martin.

FIU found their way back in the bottom of the third as Sanchez continued to deliver, blasting a three-run homer to deep right field, making the game 4-3.

Later in the inning, after walks to FIU infielders Dante Girardi and Jorge Ramirez, the Panthers tied up the game as infielder Noel Perez hit a grounder to third base that later scored Girardi.

The game was not tied for long as Jacksonville put three runs on the board in the fourth as FIU pitcher Richie Pena threw a wild pitch, giving the Dolphins a 5-4 advantage.

FIU cut the game to 9-6 in the bottom of the seventh from a wild pitch from Jacksonville and a RBI groundout courtesy of Ondina. However, the Dolphins put the game out of reach for the Panthers scoring four runs in the eighth and ninth inning to get game two in the 13-6 win.

In the final game of the series between both Florida schools saw history being made.

The Panthers had the four-run heading into the fifth after putting two runs on the board in both the third and fourth inning.

In the third inning, there were a multitude of wild pitches thrown, while in the fourth designated hitter Matthew Gonzalez got the third run on a RBI groundout with the fourth run coming on a RBI double from catcher Jayden Melendez.

Not for long, Jacksonville responded back with putting four runs on the box score in the fifth tying up the game.

After both teams were unable to score, the game headed to extras.

In both the bottom of the 10th and the 12th, FIU had opportunities with runners in scoring position with only one out, however were unable to score.

Then through the 13th inning to the 19th inning, it was a stalemate at FIU Baseball Stadium, but heading in the top of the 20th, runs finally came on the board.

Jacksonville put up five runs in the inning, highlighted by a Coipel Grand Slam that gave a cushion for the Dolphins, who ended up winning 9-4.

Sunday’s matchup was the longest game in FIU history going 20 innings and took a total of six hours to complete.

The Panthers will continue their 11-game homestand with a midweek matchup against the South Florida Bulls on Tuesday, March 14 at 6 p.m. FIU will host a weekend series against the Marshall Thundering Herd beginning on Friday, March 18 at 7 p.m.