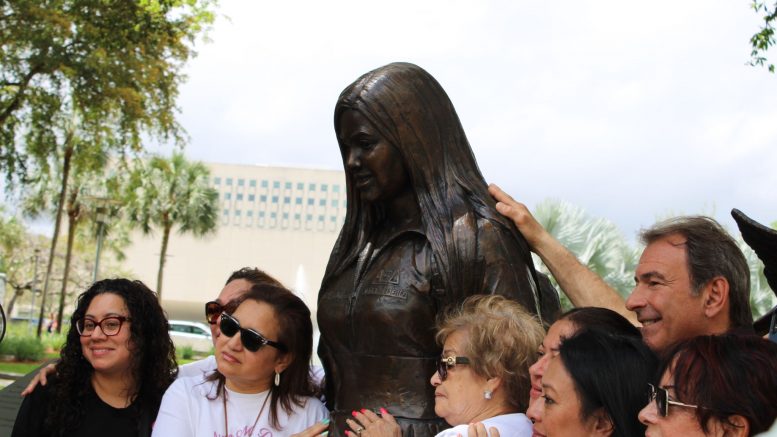 Four years after the FIU pedestrian bridge collapse, the university unveiled a statue in honor of an FIU student who died that day.

The collapse of the bridge on SW 8th St. and 109th Ave. claimed the lives of six victims on Mar. 15, 2018, including Alexa Duran, the former FIU student featured in the statue.

Duran was a political science major and member of the Alpha Xi Delta women’s fraternity. She aspired to become a practicing attorney after attending law school, according to the university-wide email that announced the statue.

Duran is survived by her parents, Gina and Orlando, and sister, Dina.

The statue is located at the crossing between the Green Library and the Deuxieme Maison building, a central point at the Modesto Maidique Campus.

Created by sculptor Brian Hanlon, the bronze statue depicts Duran at the center, in front of flying doves, surrounded by five pillars representing the other five victims.

PantherNOW spoke with Daniel Daurio, Duran’s cousin who traveled from New Jersey with his family to see the statue.

“We grew up together…we were born a day apart,” said Duran. “She was always laughing, joking around and having a good time. I like what [FIU] is doing here to honor her.”

Interim President Kenneth A. Jessell spoke first at the unveiling.

“Here at FIU, we wanted to create a space to remember that this is a place to remember what made Alexa so special,” said Jessell. “That is why today, with great humility and hope, we unveil this beautiful memorial plaza.”

Monique Joseph, a student majoring in business management, said she appreciated the commemoration, but hoped for more representation of the other victims.

“I feel like [the unveiling] honored Alexa,” said Joseph. “I feel like the other victims weren’t really represented, but I was still moved by the statue and the entire presentation.”

Danny Iglesias, director of Transportation Development at the Florida Department of Transportation, referred to a bronze plaque that will be temporarily placed at the collapse location until a new bridge is installed.

“We greatly appreciate the cooperation and involvement of all the families who contributed the beautiful words to commemorate their loved ones and bring this plaque concept to life,” said Iglesias.

The bronze plaque dedicated to the lives lost by the bridge collapse will sit at the location of the collapse while a new bridge is constructed. Maya Washburn / PantherNOW

Construction for the new bridge began in April 2021 and is estimated to commence in 2023, as previously reported by NBC 6.