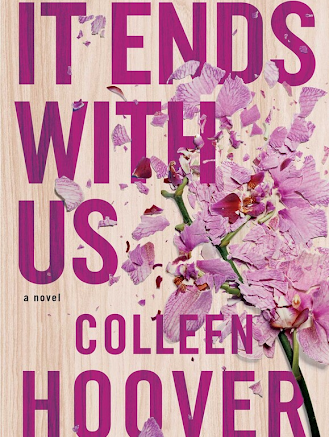 “It Ends With Us” book cover. Photo via goodreads.com

Colleen Hoover has gained a lot of popularity over the past few months with her novel “It Ends With Us.” It raised awareness on platforms such as TikTok for its many truths and hardships involved, the main being domestic violence that is faced by the protagonist Lily Bloom and her abusive partner Ryle Kincaid.

Ironically, the pair met at the rooftop of an apartment building following the funeral of Lily’s abusive father. Ryle also had a hard day with losing a patient at his work, and the two begin talking. As the novel progresses they form a seemingly healthy relationship.

Hoover, however, foreshadows the truth about Ryle when he mentions in the beginning of the novel that it’s hard for him to commit to relationships, which makes the first time Ryle hits Lydia still very shocking, but almost expected. More “red flags” are revealed about Ryle as the story continues on.

It can get frustrating how Lily ignores everyone who tries to persuade her to leave Ryle, whether it be her sister Rose or her first childhood love, Atlas Corrigan, who she bumps into with Ryle at his restaurant. As the story goes on, it becomes more understandable why Lily has a hard time listening.

Lily’s relationship with Ryle mirrors that of her own parents and how her father treated her mother. Although Lily’s character is admirable and strongly independent, the novel shows that even strong people have a weakness in leaving people, even if those people are hurting them.

Hoover shares some information in the note from the Author, saying how she wrote Lily and Ryle’s relationship based on her own parent’s relationship when she was growing up. She claims that the hitting scene was incredibly emotional for her because she had flashbacks to what her own mother endured from her father.

Although this story involves romance and tragedy, its main takeaway is the struggle to make the right decision and let go of people that hurt you, even the people that you love.