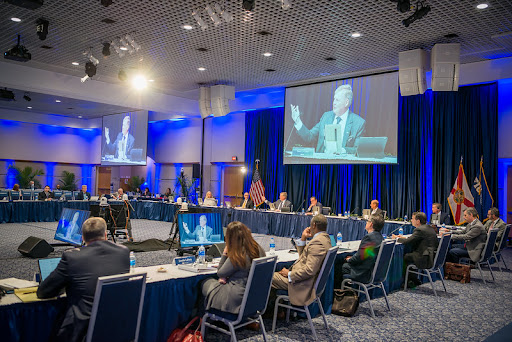 Chair Dean Colson speaks at a Board of Trustees meeting. Photo via FIU Flickr.

A university-wide email announced the selection of an executive search firm on March 8, marking the first official step in replacing former President Mark B. Rosenberg following his sudden resignation two months ago amid a misconduct investigation.

The Dallas-based firm has previously selected presidents at Rutgers, Indiana and Texas A&M Universities, according to the email.

The search for FIU’s sixth President is occurring during a period of transition for higher education across Florida.

Under the new exemption, candidates would only be made known to the public after finalists are chosen by a university’s search committee, which is followed by a 21-day review period.

Five of the state’s 12 universities, including FIU, have initiated the process of searching for a new president beginning in August of last year. SP&A Executive Search, one of the six firms interviewed by FIU’s BOT, removed themselves from contention after being selected for the same role at the University of Florida.

Following the hire, the next step in the process is naming a search committee of 15 members representing faculty, students and the community–as well as three mandatory BOT members and one member from the Board of Governors.

“The Board of Trustees has reiterated its commitment to a thorough, diligent and collaborative search process and will provide the university with frequent updates and opportunities to work together,” read the email.

The announcement of committee members is expected in early April.