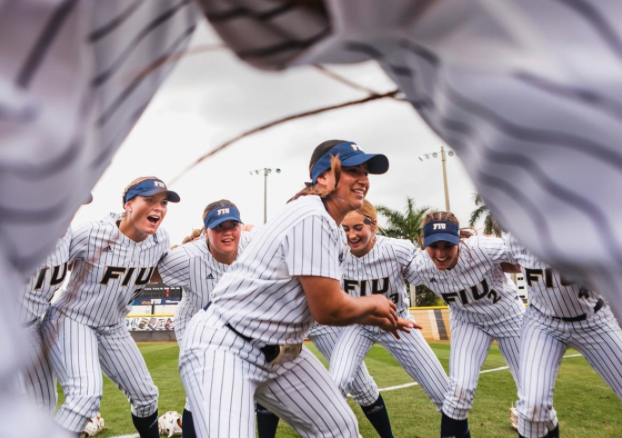 The FIU Softball team warming up. Photo by FIU Athletics.

The FIU Softball team (15-15) headed to Ruston, Louisiana for a three-game series against the Louisiana Tech Lady Techsters, in which the Panthers dropped all three games.

It was scoreless by the first inning, but in the top of the second, FIU catcher Carmen Perez got on base off an error from the Lady Techsters shortstop, bringing home infielder Venessa Gallegos to give FIU a 1-0 lead.

In the top of the third, outfielder Brooke McCann scored on another error from Louisiana Tech, pushing the score to 2-0 in favor of the Panthers.

Game two had a similar outcome, with FIU falling for a second straight game, losing 4-2.

Neither the Techsters nor the Panthers were able to score any runs in the first three innings, however infielder Kayla Whitehead opened the top of the fourth with a solo home run, followed by a RBI single from infielder Gaby Ruiz as FIU took a 2-0 lead.

Louisiana Tech responded back with an RBI single that later turned into an error, allowing another runner to score and tying up the game at two.

The battle between the teams remained 2-2 until the bottom of the sixth when the Techsters blasted a two-home run to deep left, making it 4-2 heading into the final inning.

FIU was unable to tie up the game as Louisiana Tech took game two.

In Sunday’s finale, the Panthers lost the afternoon contest by a score of 2-0 and were swept in the series.

After losing all three games to the Lady Techsters, the Panthers overall record dropped to 15-15 overall and 1-5 in Conference USA.

FIU will head back home for a matchup against the nationally ranked #2 Florida State Seminoles in a doubleheader on Saturday, March 26 beginning at 1 p.m.