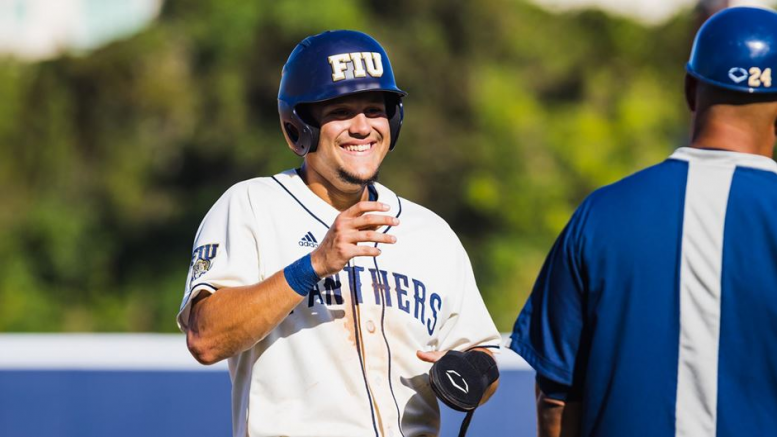 FIU outfielder Robert Sotolongo had a grand slam in Saturday’s win over the Marshall Thundering Herd. Photo by FIU Athletics

FIU Baseball (9-12) kicked off conference play with a three game set against the Marshall Thundering Herd, in which the Panthers took two out of three.

Heading into the series, FIU had a season-worst 10 game losing streak, and had yet to win a series since their opening weekend against the St. Thomas of Minnesota Tommies.

In game one, the Herd immediately answered on offense as infielder Luke Edwards led off the game with a solo home run off FIU pitcher Patrick Pridgen, making it 1-0.

The bottom half of the first inning, the Panthers tied the game up on a RBI single courtesy of infielder Adrian Figueroa that brought home outfielder Robert Sotolongo.

Later in the third inning, after two walks by Pridgen, Marshall outfielder Kyle Schaefer drove a ball to deep right field for a three-run home run, giving back the lead to the Herd, 4-1.

Marshall then tacked on two more runs in the fourth to extend the lead to five. However, the Panthers cut the deficit to three with a two-run home run by outfielder Alec Sanchez, his fifth homer of the season.

Not for long, the Thundering Herd added much insurance to their lead putting up five runs across between the eighth and ninth inning to eventually get the 11-3 win on Friday night.

Game two of the series featured the Marshall Thundering Herd taking an early 3-0 lead heading into the bottom of the second.

The Panthers found more success on offense, after an RBI walk from infielder Dalton Hurst, a single from FIU outfielder Rey Hernandez that scored infielder Jorge Ramirez the bags were full for Sotolongo who blasted to left field for his first career grand slam that put FIU up, 6-3.

The madness continued as two more runs were added to the score after RBI singles from Ramirez and catcher Matthew Gonzalez. FIU ended the eight-run inning up by five over the Herd.

In the bottom of the fourth, the Blue & Gold added to their lead as Hernandez crushed a home run to right field extending the lead to 9-3.

FIU brought home two more runs in the seventh on errors from Marshall, and eventually the 11-game losing streak ended with an 11-3 win to tie up the series at one.

For the series finale, the Panthers took no time to respond as they came out of the gates in the bottom of the first. FIU put up seven runs in the inning on six hits, which was the most runs they have scored in an inning thus far this season.

The offense continued into the fourth inning as after Lorgia and Hurst brought home runs on RBI singles, Sanchez had an opportunity to have the bases loaded, and hit a grand slam, making it 13-0 FIU.

The Panthers took the final game of the series by a score of 13-3 to improve to 9-12 on the season.

FIU will head to Ruston, Louisiana for their first weekend road contest against conference opponent the Louisiana Tech Bulldogs, beginning on Friday, March 25 to Sunday, March 27.