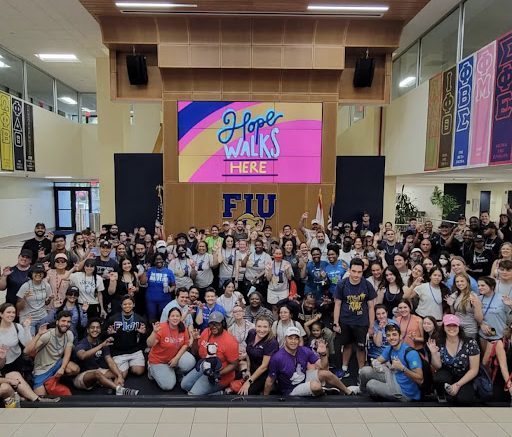 The annual Out of the Darkness Walk arrived again on Saturday, March 21, hosted by the American Foundation of Suicide Prevention (AFSP). There are Out of the Darkness walks all over the country but FIU is the biggest walk in the state of Florida. FIU fights for suicide prevention as suicide rates for college are still at alarming high rates.

Suicide Prevention is a topic not discussed in society but it is very apparent. “Suicide is among the top 10 leading causes of death in the United States, resulting in about one death every 11 minutes.” states the flhealthcharts.gov.

The walk is meant for everyone whether it be a survivor, family, or supporter of the cause.

A major connection between the walk is honor beads. Every participant wears beads around their neck to indicate why they are walking. Whether it be for themselves, awareness, or the loss of a loved one. These honor beads allow for others to know the reason, which opens up conversations.

People walk for many different reasons, but all thrive for the awareness and education of suicide prevention. AFSP focuses on bringing light on an issue that is stigmatized in society.

The walk consists of two miles around the Modesto Maidique Campus. There are checkmarks around the walk, consisting of snacks and water so that anyone can go at their own speed.

Donations are a big cause of the walk, as they go towards many different elements. A major one includes education of mental health towards schools and the general public. AFSP also gives support to survivors of suicide loss through the program healing conversations.