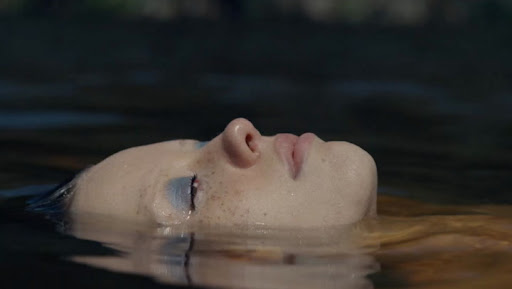 Every-so-often, a title comes along that really pecks at the question of what constitutes a good film. Are visuals simply enough to keep an audience entertained? Should narrative instead take center stage?

“X” is a film that makes you sit with those questions. First and foremost, it’s not categorically enthralling like a typical slasher movie would be. It’s brooding in every sense of the word, unnerving viewers with pans of vast Texas (in actuality New Zealand) plains and a bout of close calls with death before unwinding its third act bloodbath.

With their intent unknown to its elderly owners, a film crew enters a rural farmstead to secretly create an adult film. The crew comprises of enthusiastic producer Wayne (Martin Henderson) determined to cash in on the growing home video market; budding adult entertainers Bobby-Lynne and Jackson (Brittany Snow and Kid Cudi); with director RJ (Owen Campbell) pulling along his girlfriend Lorraine (Jenna Ortega) in hopes to add the avant-garde to the project.

Both the film and the elderly farm owners give particular interest to Maxine (Mia Goth), another aspiring adult actress serving as a stand-in main protagonist and prominent object of attraction.

Things start going south for the crew as the elderly farm owners, particularly recluse Pearl (a dual role for Mia Goth), confront their jealousy of the actors’ youth and sensuality, culminating in mass slaughter.

For most of its tension, “X” plays on the juxtaposition between racy clips from its inner-film, aptly titled the “Farmer’s Daughter,” and a presupposed aversion to aging bodies, personifying the elderly farm owners with folds of contorted prosthetics.

The inspiration drawn from the original “Texas Chainsaw Massacre” series is uncanny but makes it hard to analyze its merits on a standalone basis. In a film with so much to show, it doesn’t do a lot to say much at all.

Though its ensemble is up to snuff, the film would’ve overall benefited from more characterization in both the crew and their tormentors. While Goth’s Pearl certainly outshines her Maxine, there’s a sense that the novelty of having Goth play both parts deprived Maxine of a more well-rounded portrayal, which in turn centers both performances on the effectiveness of Pearl’s prosthetics.

Within this sell, the film deconstructs exhibitionism, alluding to the literal lewd draw of an exhibitionalist and the performativity of images. On the other hand, this lack of elaboration seems to be deliberate on account of Pearl’s self-titled prequel already in post production.