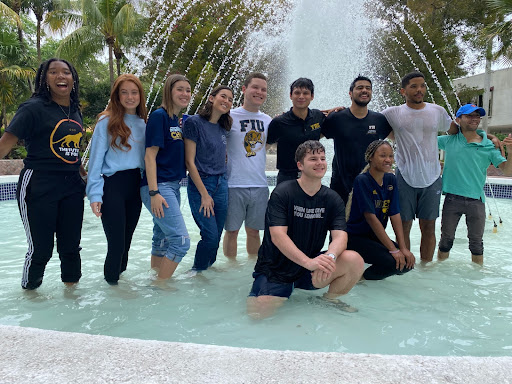 Winners celebrate with a dip in the fountain / Arianna Otero

Students gathered around the Graham Center pit on Friday, March 25, as the Student Government Association elections board announced the 2022-23 SGA election results.

“To be honest, it feels so surreal. When I came [to FIU] two years ago, I did not see myself in this position,” said Lugo. “My biggest expectation is that for everything I do that it comes to reality and it actually has an impact on the students.”

CASE Senators were not among those celebrating due to a problem with the ballot.

Two of the original candidates, Zoilo Batista and Brian Levine were disqualified only a few days before voting. SGA advisors were unable to discuss the reason for disqualification with PantherNOW due to Family Educational Rights and Privacy Act guidelines.