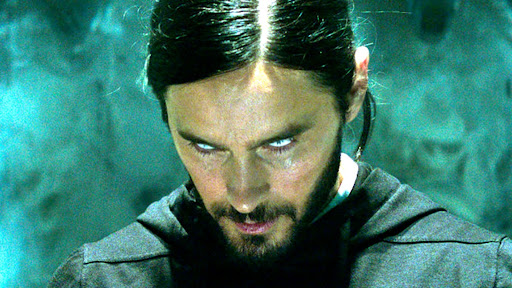 Despite having the backing of two heavyweight conglomerates, “Morbius” manages to fumble any good grace left for a mid-tier Marvel off-shoot.

Much of “Morbius” leaves its audience questioning — not of anything cogent plot wise but of what constitutes as a bait-and-switch.

Its trailer, through a trained eye still clutched its pearls, assured a chilling change of pace from the cut-and-dried conventions of superhero fiction. Think a stoic “Dr. Jekyll and Mr. Hyde” but as a misunderstood antihero. Instead, what was delivered sunk so below any disparaged optimism for a cinematic universe that it’s a miracle only two hours are wasted.

Most have already stamped this film as an utter mess, but frankly, it’s just too boring to leave that much of an impact.

Opening on a scene only contextualized through the trailer, we center on Michael Morbius (Jared Leto), a renowned doctor determined to find a cure for the rare blood disease he and his childhood friend Lucian (Matt Smith) suffer from.

By means of convoluted movie-science jargon, he attempts to splice bat genes into a healing serum but inadvertently turns himself into a vampire during one of the trials. Jealous of Micheal’s newfound abilities, Lucian then also injects himself with the serum, sending the pair on a haphazard vampire battle around New York City as their morals and desires surrounding their powers conflict with each other.

As tedious as it sounds, emphatically, it’s ultimately a mishmash of fruitless CGI choices and low effort acting that has the gall to advertise itself as a “Legend” arriving.

As with a majority of recent Marvel properties, the biggest selling point is the larger continuity this small piece of the puzzle is meant to offer. And, oh, did this film attempt to ride those coattails — hard.

The social marketing of Morbius was driven solely by the trailer’s explicit Michael Keaton inclusion, alluding to not just a grander presence of the Sony-verse in the MCU, but to Keaton reprising the role of the Vulture as a main feature of the cast.

Though Keaton does eventually pop up in the post-credits, his specific scene from the trailer is cut altogether along with its other viral Spider-Man easter eggs. The stockpile of footage assembled from what was left on the cutting room floor could constitute an entire film in itself.

It’s clear Sony is trying to fast-track its way to some semblance of a Sinister Six team-up in any lucrative way possible, but the hypothetical of that end doesn’t justify these lackluster means.

Sorry to bear the bad news, but no, repeating the same shot of Jared Leto hissing over his shoulder is not compelling in the slightest. 3/10