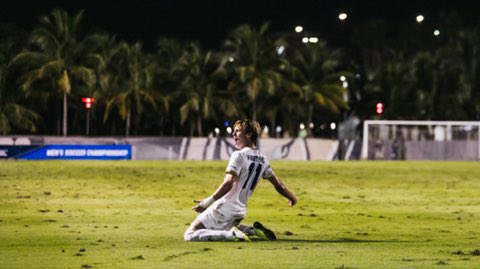 Mauro Bravo sliding after scoring a goal at the FIU Soccer Field. Photo by FIU Athletics

Former FIU Midfielder Mauro Bravo has signed a professional contract with Orlando City B of MLS Next Pro.

Bravo is now a part of seven other alumni of FIU Men’s Soccer who have been signed by a Major League Soccer team and/or its affiliate. This includes other players like Robin Fraser (LA Galaxy), Steve Ralston (New England Revolution), and Tyrone Marshall (Colorado Rapids)

Bravo joined the Panthers as a transfer in his junior year in 2020, coming from the Iona Gaels. Appearing in 18 games throughout his career at FIU, Bravo featured in a starring role in his final season.

Bravo scored four goals and assisted three in 16 games during his senior year. He scored and assisted in the Panthers 4-1 victory over the 2021 National champion Marshall Thundering Herd that helped FIU claim its first regular season conference USA title since 2017.

Bravo made all-conference third team in his junior year and was selected to the TopDrawerSoccer national team of the week after his standout performance against the Herd. He leaves FIU as a C-USA regular season champion.

MLS next pro is a developmental league aimed at helping young professional soccer players prove themselves to teams in the MLS and abroad. This is the inaugural season for the league.

Bravo will be looking to break into the Orlando City first team, who made the playoffs after finishing sixth in the MLS eastern conference last season. Orlando City has seven midfielders on their senior roster, meaning Bravo will face lots of competition for a spot on the roster.

With solid performances in the MLS Next Pro league, he could break through to the senior squad or get signed elsewhere.