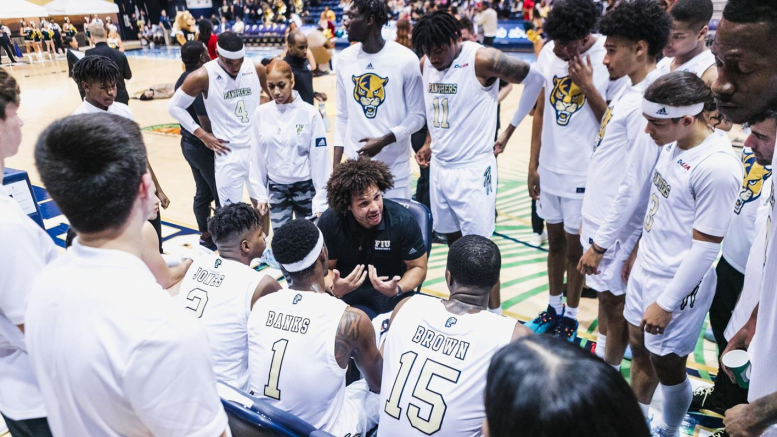 After one of the most historic starts in program history, and going an impressive 11-5 at home, the FIU men’s basketball team failed to keep momentum going as they were once again first round exits in the C-USA Tournament, finishing with a record of 15-17.

FIU’s 2021 season began with the ever changing rules of COVID-19, and star players leaving the university, with newer ones taking their place.

One of FIU’s star players of 2020 was Antonio Daye. Jr, who transferred to the Fordham Rams, where FIU quickly found his replacement in redshirt junior Tevin Brewer.

During the 2021 Men’s Basketball season, FIU ranked number 5 in total season assists with 443, but nearly dead last in turnovers with 447, the second most in the entire C-USA.

When it comes to the pre-conference season record, FIU had an impressive 11-3 start, but once conference game began, the Panthers were ranked 11th out of 14, with a conference record of 5-13.

On top of that, FIU had an abysmal 1-11 road record, which is primarily where their downfall started.

Compared to their other C-USA opponents such as Middle Tennessee, UAB, and North Texas, three teams that have been on winning streaks for years, FIU has had difficulties when it comes to conference play, and they have yet to see progression as the years go by.

FIU in their huddle. Photo by FIU Athletics

FIU’s first road game was against SEC’s very own Georgia Bulldogs in Athens, Georgia. Despite the Panthers keeping it close throughout the game, they slowly crumbled in the second half.

Even though FIU lost their first game of the season, it was good test for the program to begin their season.

An impressive and unpredictable start to the season saw the FIU Panthers winning eight straight games after their first game loss to the Georgia Bulldogs, and five straight wins at home kickoff the season.

Starting the season 8-1 was the start to a season in program history. Players such as guard Tevin Brewer and forward Clevon Brown made their presence known, putting up double digit numbers nearly every night at the Ocean Bank Convocation Center.

After a historic start and a week off to prepare for finals, the Panthers headed on the road in mid-December for a two-game road trip, beginning with the Eastern Michigan Eagles.

In a close back and forth matchup, the Panther’s fought until the end, as they game went into overtime.

After each overtime that went by, the Panthers were getting more and more lethargic, losing every ounce of energy they had. On the other hand, the Eagles were fighting back and taking control every second they could. Finally, after four overtimes, the Eastern Michigan Eagles took the win over FIU with a score of 92-88, giving the Panthers their second road loss and regular season loss.

Skip forward a few days and the Panthers find themselves in trouble again, trailing by a score of 63-57 to the Jacksonville State Gamecocks, a team that at the time seemed like a beatable opponent. With 47 seconds left, the Panthers missed two three pointers and fouled a Gamecock, costing them the game. The Panthers would go on to lose by a score of 66-59.

The Struggle of Conference Play

The Panthers back to back losses to EMU and JSU were tough for the team and fans, as just a week prior to those games, FIU was dominating at home.

A few days after the game against Jacksonville State, the Panthers would go into a COVID lockdown, where they were unable to practice and play for 14 days. They finally returned to the hardwood on December 30th as they would face their first conference opponents, the Old Dominion Monarchs.

After 40 minutes of aggressive offense and defense, Old Dominion came out with the win by a score of 82-77, but most importantly, handing FIU their first home loss of the season.

FIU’s next opponents in the conference slate of games were Western Kentucky, UAB, and Middle Tennessee, all played in a back to back road trip. This was the most difficult competition the Panthers faced so far in the season; they lost each game by double digit points, with their largest margin being a loss to UAB by 28 points. This would put their conference record at 0-4 for the year.

When FIU came back to Miami, they got back two wins with victories over Marshall and a Western Kentucky They jumped to the number five spot in the C-USA Eastern Division, bumped their conference record to 2-4.

However for the Panthers, they lost ever single road contest until a win overMarshall on February 10th.

Even at home, FIU continued to struggle, only mustering two wins out of the six games played at home against conference opponents since their two wins against Western Kentucky and Marshall.

FIU G Eric Lovett with a clutch three-point basket in their thrilling win over Western Kentucky. Photo by FIU Athletics

FIU ended their season with a conference record of 5-13, and an overall record of 15-16, placing them second to last only ahead of Marshall, who was the 7th seed.

They would go on to play Marshall in the first round of the C-USA tournament.

Marshall and FIU played twice during the regular season, with the Panthers taking both games.

In the C-USA tournament however, much more was on the line. This was win or go home for FIU, and unfortunately for them, they went home.

The game was rough from the start, with FIU being out of it since tip-off. The Panthers didn’t take the lead not once throughout the whole game and were missing costly points, while only shooting 38%.

Despite how tough it is to beat the same team three times in a row, it is safe to say that FIU was not prepared for this explosive Marshall defense. Marshall shot around the same percentage as FIU, but had doubled the rebounds, and half the turnovers that FIU had. Marshall would defeat FIU in their third matchup with a score of 74-62.

The Panthers would end their season with yet another first round exit. Despite having a promising start early on in the season, they were not able to carry the momentum into conference play, ultimately ruining any chance they had at a championship.

A few months after their disappointing loss to Marshall which caused them a first round exit, the Panthers would find themselves in even more trouble, with star player Tevin Brewer leaving the program and entering the transfer portal.

Tevin Brewer was a key player to FIU’s success, leading the team in pts with 15.2 ppg and assists with 5.6 ppg.

At the end of the season, Brewer was named C-USA’s All-Conference USA Third Team player, becoming the only Panther to win a conference award this season.

Following Brewer are the likes of senior players Eric Lovett and Isaiah Banks. Banks and Lovett are both graduating this year, and will no longer be able to compete at the collegiate level unless they use the NCAA’s extra year of eligibility opportunity, according to NCAA guidelines.

FIU’s coaching staff now has to fill up the Tevin Brewer sized gap in the lineup. With younger players such as guards Denver Jones and Petar Krivokapic showcasing their skills this past season, the absence of Brewer can shed more light on these younger players next season.